A delicious tiella of potato and shark

While historically Puglia has a stronger Greek influence, there is a typical Apulian dish, tiella or tortiera, which derives from the Spanish paella. This was brought to them by the Bourbons and there are dishes of the same name in Lazio, Campania and Abruzzo, all attributed to the Bourbons. The round tin or copper baking tins that it is cooked in (or more traditionally, terracotta) are also called tiella, taieddha or taeddhra. These casseroles are now baked in the oven but before the days of electric and gas ovens, they were baked on Sundays in wood stoves with a cover, on which coals would be layered to ensure that the layers cooked evenly. 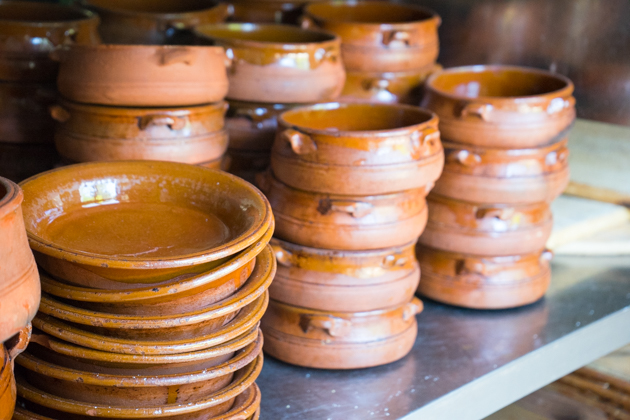 There are many variations, the most famous being tiella barese with layers of baked rice, onions, potatoes, mussels, fresh tomato and Pecorino cheese from Bari. In Salento courgettes (zucchini) and parsley are added. In Foggia, where my husband’s grandfather is from, fried salt cod is layered with sliced potatoes, minced garlic, parsley, onions and halved cherry tomatoes. Other economical fish and seafood are also substituted such as octopus, anchovies and sardines. There are also vegetarian versions where the mussels or fish are replaced with oyster mushrooms (cardoncelli) or is simply a baked casserole of peppers, aubergines (eggplant), potatoes and tomatoes. Sometimes artichokes are added. There is even a version with horse meat from Bari. The more ingredients that are included, the more layers there are and the taller the tiella. Below I have the version we had in Mola di Bari which was shark and potato although I use the more commonly available monkfish as a substitute for the shark.

For an illustrated step-by-step guide to making this dish, click here.

80 mls extra-virgin olive oil, plus more for greasing the pan

Mix together the parsley, garlic and olive oil with salt and pepper to taste. Toss the potatoes with one third of the parsley garlic mixture.

Toss the monkfish with one third of the garlic parsley mixture and place on top of the onion layer.

Cover the casserole with aluminium foil and bake in the oven for 30 minutes. Remove the foil and bake for another 30 minutes, until the top is golden and the fish and potatoes are cooked through.

Thanks for visiting Living a Life in Colour again, good to have you back here. If you haven't yet, you might want to subscribe by e-mail . Enjoy! Thanks for visiting!
« Puglia’s Gargano: Italy’s spectacular Adriatic coast
Pappardelle with braised beef short rib ragú »