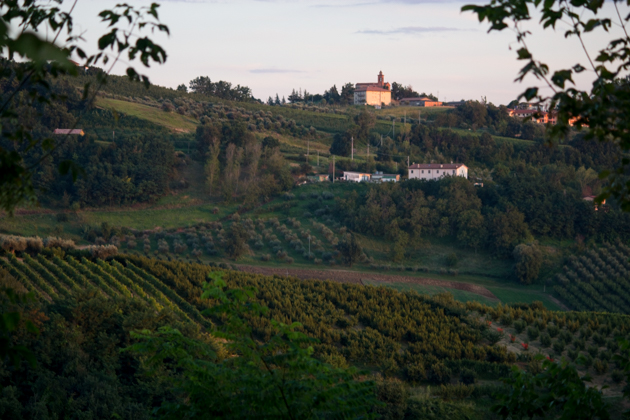 Driving down towards the Adriatic Sea from Emilia, we enter Romagna and its vineyard-covered hills. 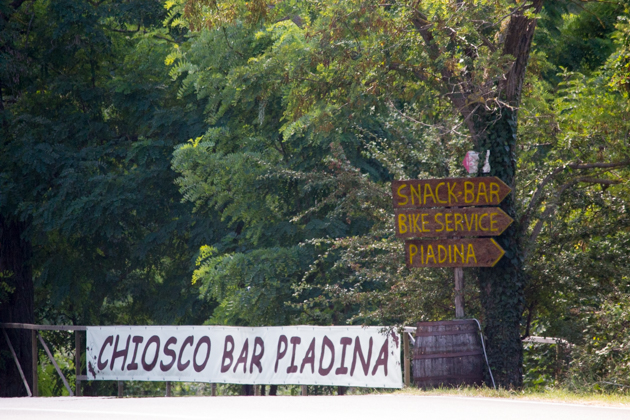 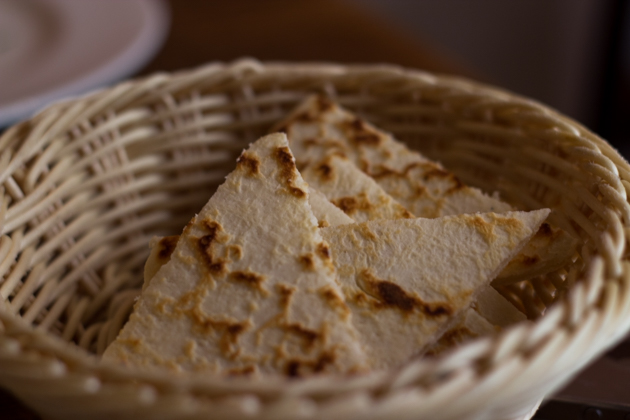 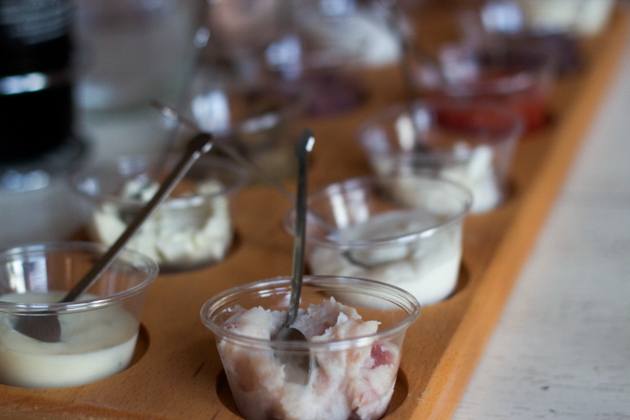 We have officially left Emilia and entered Romagna. An obvious indication of this is the rudimentary signs for piadina places. These are informal countryside restaurants with large groups of family and friends sitting outdoors enjoying the local flatbreads, traditionally griddled on terracotta or hot plates and served with fresh cheeses, greens, herbed lard spread and salumi. 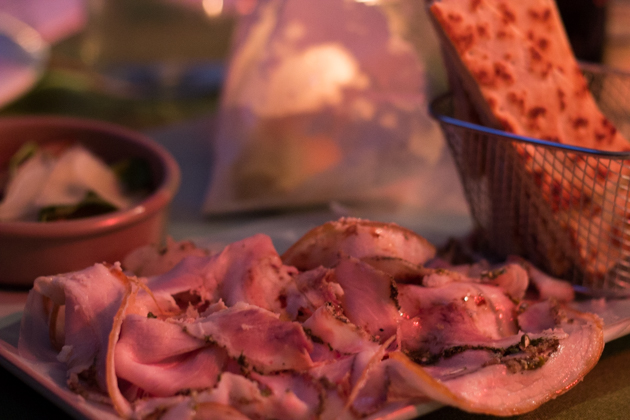 Local ham served with the piadine 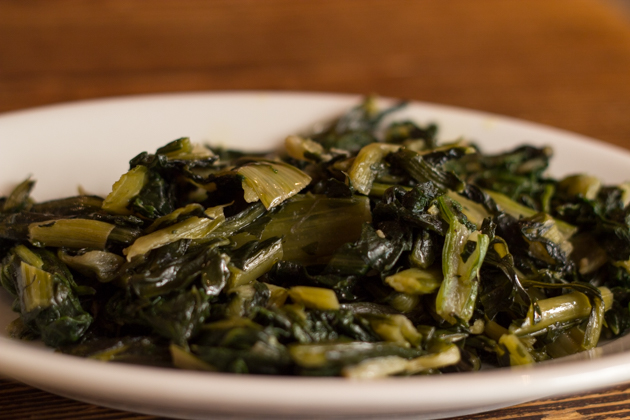 Along the coast is the ancient city of Ravenna, the jewel in the crown of Romagna with no less than 8 UNESCO sites to boast of, each dating back to the 5th and 6th centuries. The early Christian mosaics are breathtaking and are not to be missed. The best examples are the Byzantine mosaics inside the Basilica of San Vitale and next to it, the Mausoleum of Galla Placida. 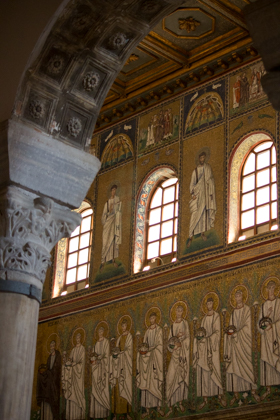 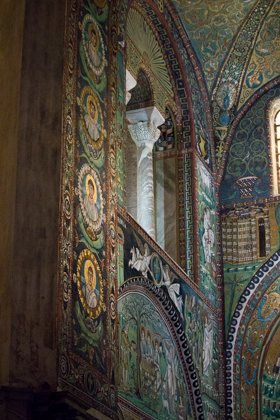 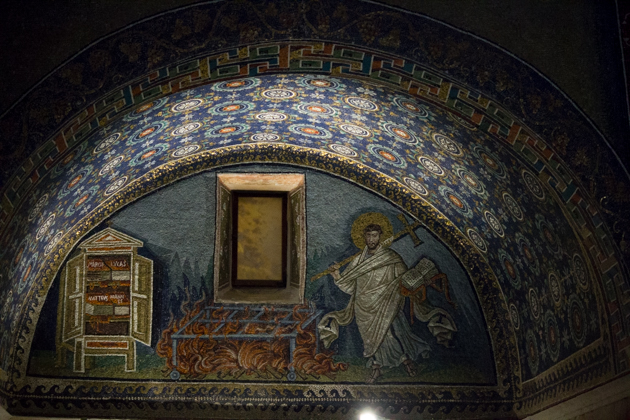 Just outside the centre of Ravenna is the stunning Basilica of Sant’Apollinare in Classe. 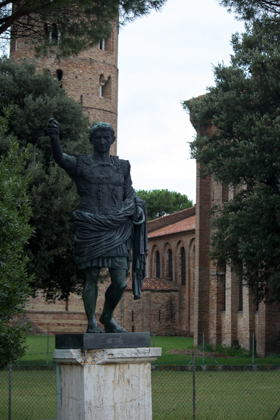 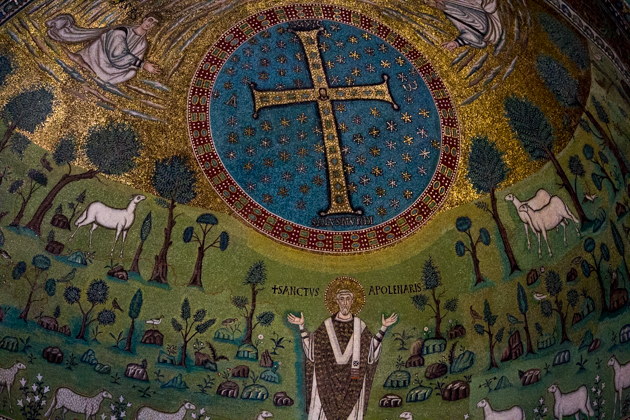 Heading south from Ravenna, towards San Marino, we also found an excellent restaurant called dei Cantoni in the tiny town of Longiano for dinner. The scenic drive up to the town offered beautiful panoramas of the surrounding countryside. The restaurant has a large covered terrace for dining in the summer. The food was excellent and the wine list offered a choice of the best local and national producers. The local Sangiovese grape-based wine was as good as many of its Tuscan neighbours. 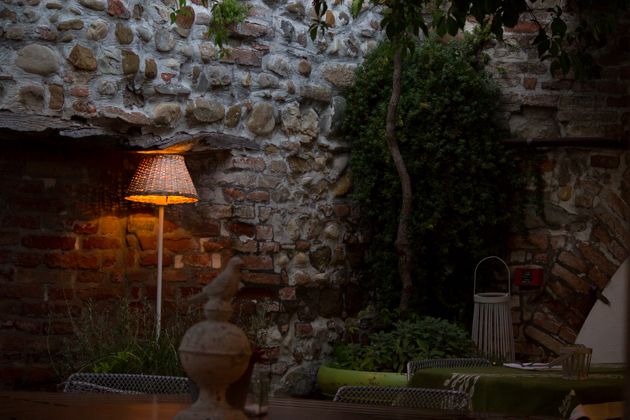 Inside the restaurant dei Cantoni 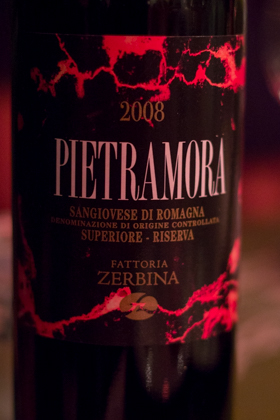 As we get closer to the city states of San Marino and San Leo, fields of white wildflowers interrupt various shades of green and strange rock formations rise above it all, some with hilltop fortresses on them. 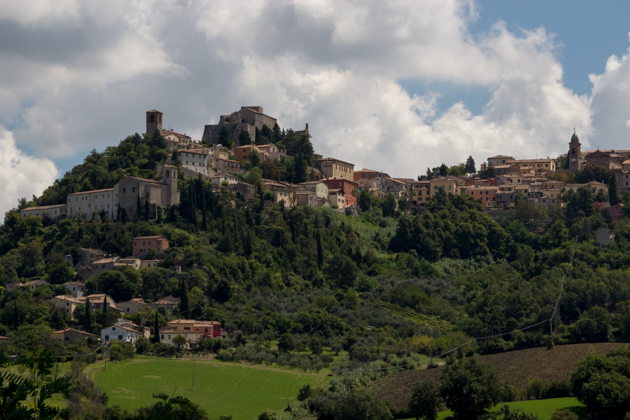 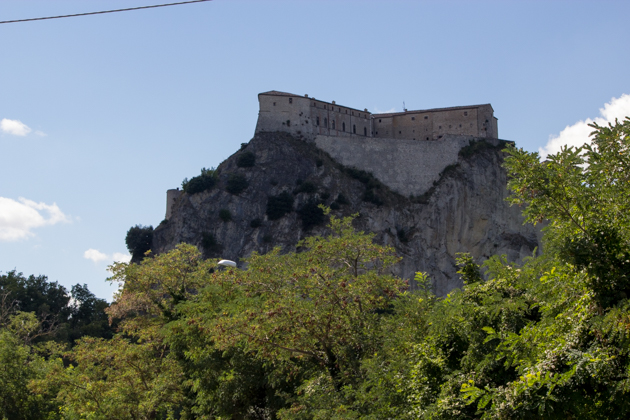 To the southwest of San Marino is the small town of San Leo, which sits on a cliff face overlooking the Marecchia Valley. The palatial fort of San Leo was constructed by the Romans in a strategic location that was important throughout the various conflicts that took place through the centuries. The fort served as a prison in the 17th and 18th centuries. Today it houses a museum and an art gallery. Perhaps this illustrates the evolution of civilisation. 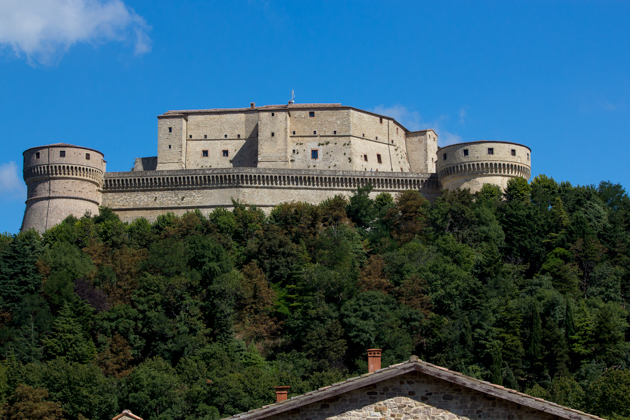 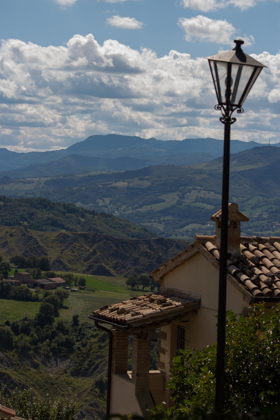 View over the Marecchia Valley

The town was named for Leo the Dalmatian, a stonemason who led his eremetic life here. The Paris Church of Pieve was founded in the place that Saint Leo knelt to pray. We bought some local pecorino cheese and sat watching old men play chess, children eat gelato and tourists pass by. 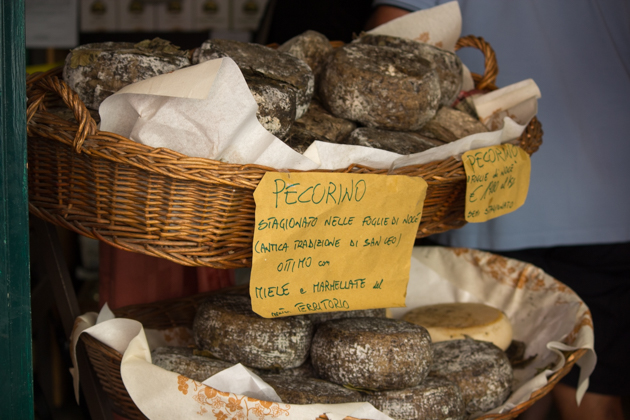 It was a hot sunny day when we arrived in San Marino and it was crowded with like-minded tourists. The Republic of San Marino is a wealthy microstate, independent of Italy, with a total area of 61 square kilometres of land. They proclaim themselves to be the oldest surviving sovereign nation and constitutional republic, founded in 301 AD. Situated on a hilltop, they have stunning views of the surrounding countryside. 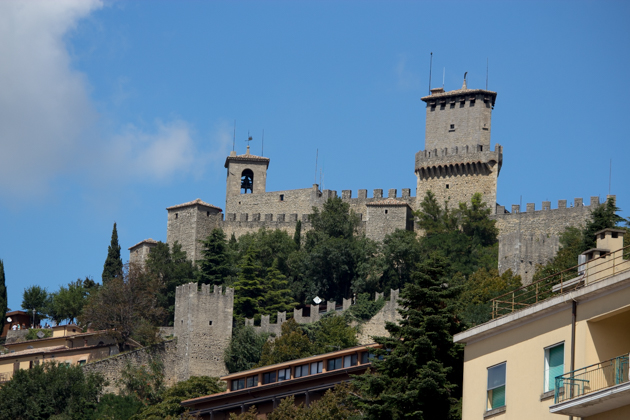 Until you can make it to Romagna yourself, I’ll share my recipe for piadina. Just make up a batch, buy some freshly sliced salumi and soft spreadable cheese, sauté some greens and invite some friends over for a picnic. 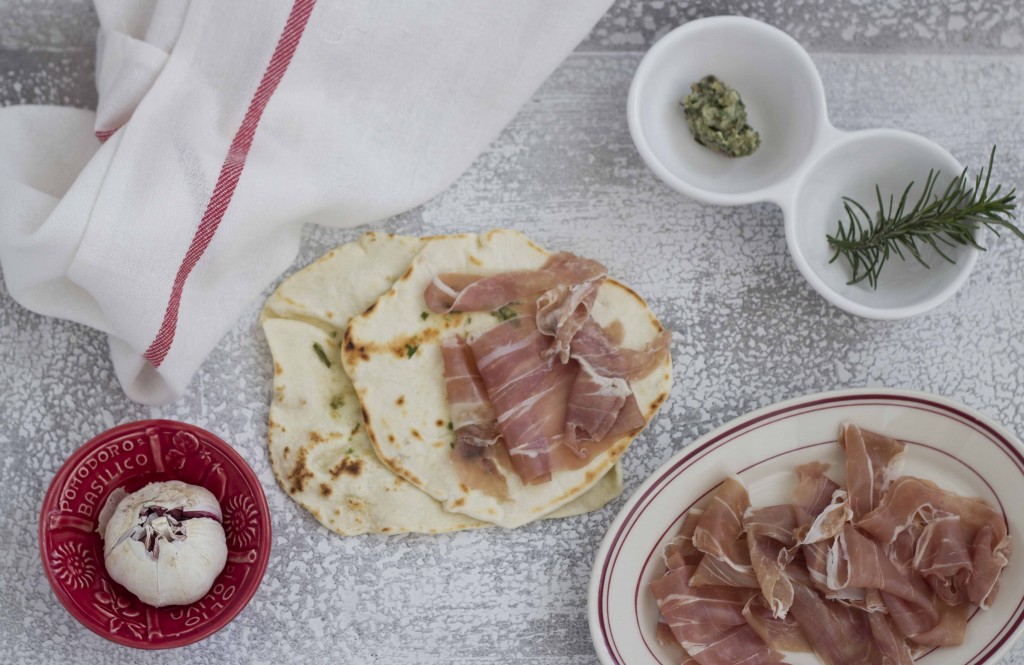 Piadine (the plural of piadina) can be enjoyed with various sauces, sautéed greens, tomatoes and/or a range of salumi and cheeses. The traditional sauce is a paste presented in this recipe made with lardo, rosemary and garlic. For illustrated step-by-step instructions, click here.

To make the paste:

To make the dough: 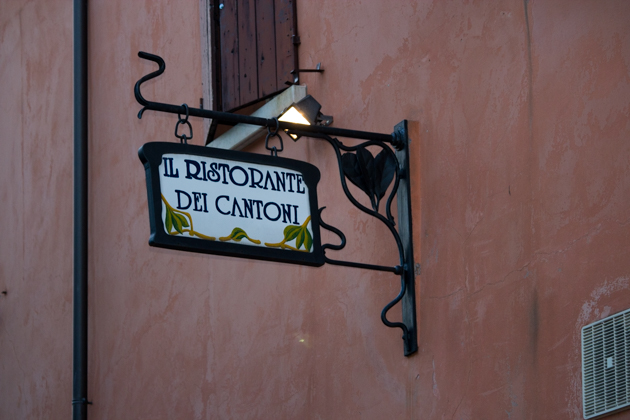 An excellent local restaurant with a beautiful view over surrounding hills. The inside courtyard is a tranquil place to dine on local salumi, stuffed pastas, gnocchi, tagliata (sliced steak with tomato sauce and cheese), grilled meats and homemade desserts.

Thanks for visiting Living a Life in Colour again, good to have you back here. If you haven't yet, you might want to subscribe by e-mail . Enjoy! Thanks for visiting!
« Bologna: A food lover’s heaven
Why visit Le Marche? »