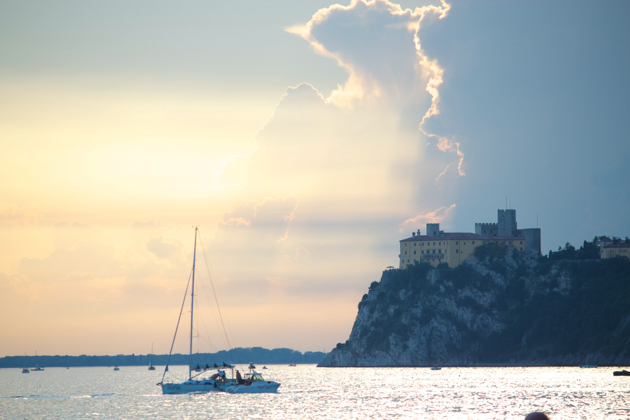 Sunset over the Adriatic Sea and Duino Castle

Friuli-Venezia Giulia is located in north-eastern Italy, and borders Slovenia (formerly Yugoslavia) to the east, Austria to the north, Veneto to the west, and the Adriatic Sea to the south. Due to the geographic proximity and a history of influence from neighbouring nations, there is a mixture of cultures from the Balkans, Austria, Germany, and Hungary. 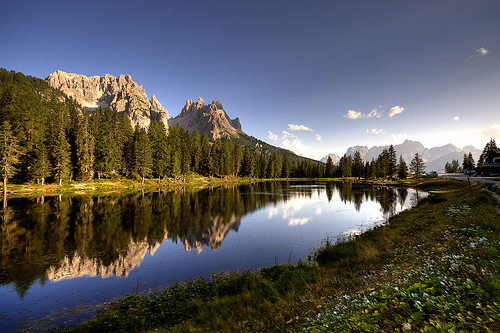 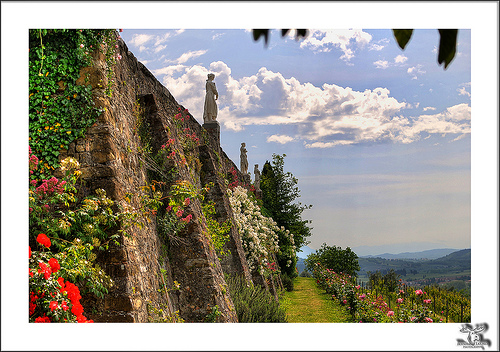 Abbazia di Rosazzo in the Collio by Bernhard Latzko

Friuli, as the region is usually known, is a prosperous agricultural area famous for its wines (a great deal of Pinot Grigio is produced in Friuli). The region is framed to the north by the Alps – or Dolomites as they are known here – and the land then flattens out to the south of the mountains towards the sea. It is these flat plains that are home to many farms growing agricultural products on a large scale. Southern Friuli has long been associated with the sea: after all, its most important fishing port, Grado, is situated on the Venetian lagoon and provided the Austrians with their most glamorous ‘riviera’ destination. Indeed, much of the fruit and wine that was grown in Friuli was sent by train up to Vienna when the Austro-Hungarian empire was in power. The Collio hills, in the region’s north-eastern corner, are famous for the fine white wines that are produced there in many small holdings still worked and run by individual families. They use indigenous grapes like Ribolla Gialla, Friulano (formerly known here as Tocai Friulano), Malvasia Istriana and Piccolit. In the Carso Hills, the native Vitovska and Terrano grape varieties are made into characterful wines. 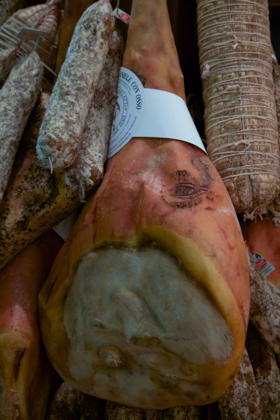 The people of Friuli are often considered to be rather closed, yet their hospitality is never lacking. Visit any winery in Friuli and you’ll be offered platefuls of cheese or salumi to accompany a glass of wine. The food in Friuli is hearty and down to earth, like its cooks. 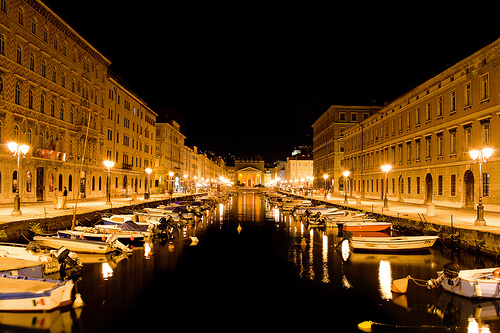 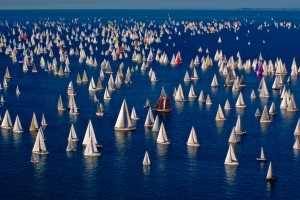 Trieste was one of Italy’s most important ports and a key gateway between central and Eastern Europe. It is a grand and noble city, known at the end of the 19th century for its café society that attracted authors such as James Joyce to live there. Today the coffee connection remains: Illy Caffè, one of the world’s most loved coffee companies has its headquarters in the city. It’s fun to wander its streets and piazzas, stopping in at the many original cafés along the way.  Lovers of seafood should make their way to Grado, where small fishing communities still make their catches daily in the Adriatic. 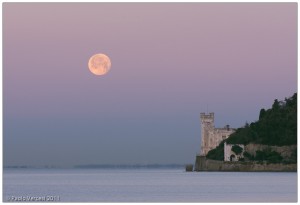 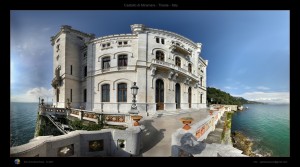 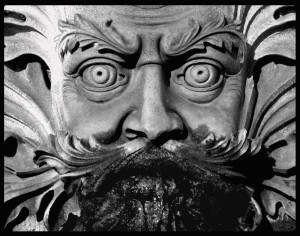 Poseidon at Miramare Castle by Capisicina

In Trieste, see the Colle di San Giusto (site of an ancient city and now the ruins of a castle and church), the Castello di Miramare (a 19th century castle), and the port. 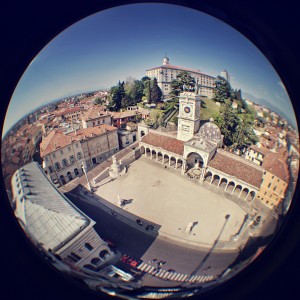 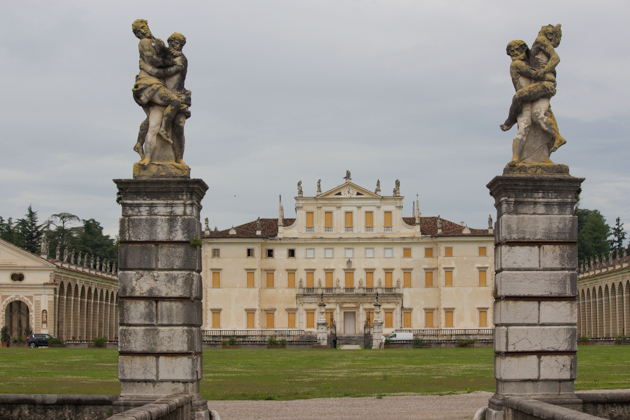 In Udine (a 13th-century town), visit the Piazza della Libertà (a Renaissance town square where the market is held), the Tempietto (an 8th-century building near Piazza San Biagio), and the Museo Archeologico Nazionale (an archaeological museum in a 16th-century palace). Outside Udine, visit the Villa Manin (a 16th-century villa, which was the country estate of the last Doge of Venezia). 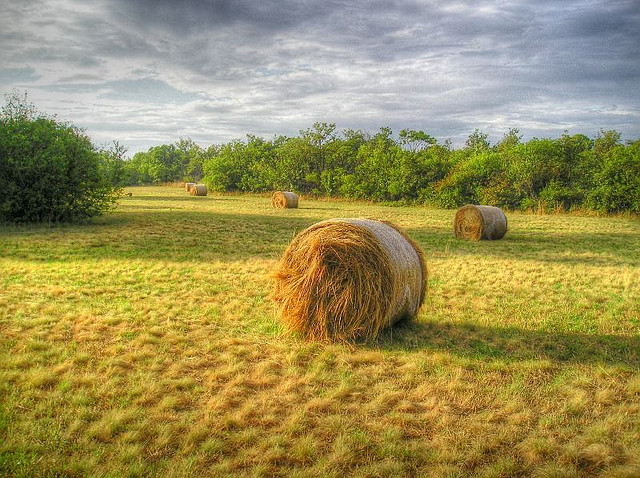 Hay bales near Trieste by Mariotto52

Other attractive towns to visit include: Cividale del Friuli (a small town with a river flowing through it which has many attractive osterias), Cormòns (as the seat of the region’s wine producing consortium, this village has many  nice wine bars), Gorizia (a village which enjoys a mild climate and has attractive architecture), Gradisca d’Isonzo (a town with a 15th century castle which produces wine and ceramics), San Daniele del Friuli (a town famous for their excellent prosciutto), Spilimbergo (home to a famous mosaic school) and Valvasone (a riverside town reputedly producing the best Montasio cheese in the region). 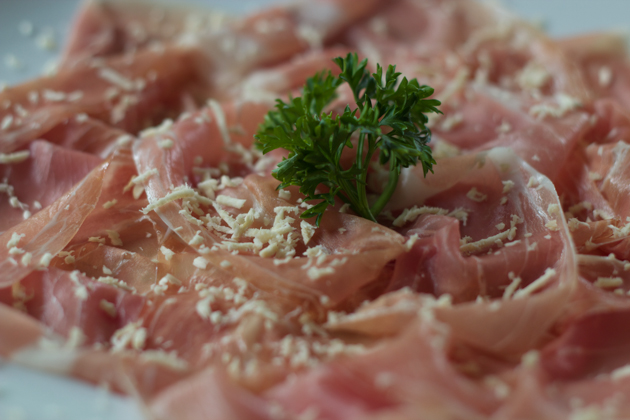 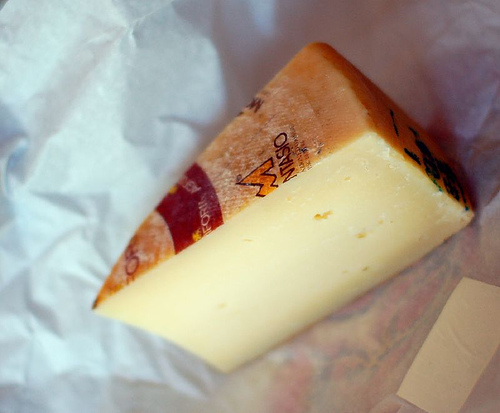 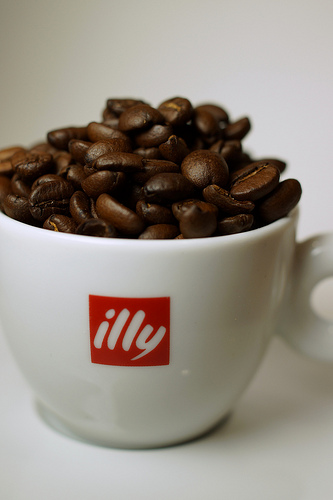 Polenta, cheeses, and soups enriched with pork are the common fare of Friuli-Venezia Giulia. Rice is not as common here as in neighbouring Veneto and tends to be used in broths and vegetable soups. In Friuli, field greens and herbs are used as flavourings. Good use is made of locally grown turnips, radicchio, beans, and Jerusalem artichokes. There are many types of cheese produced and consumed here, particularly Montasio DOP (a firm, semi-mature to mature cow’s milk cheese), Formaggio salato della Carnia (a salt-brined cow’s milk cheese) and scuete fumade (a type of smoked ricotta). 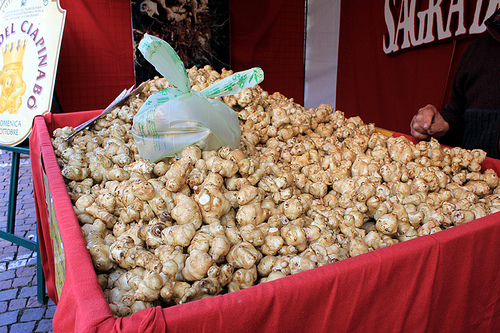 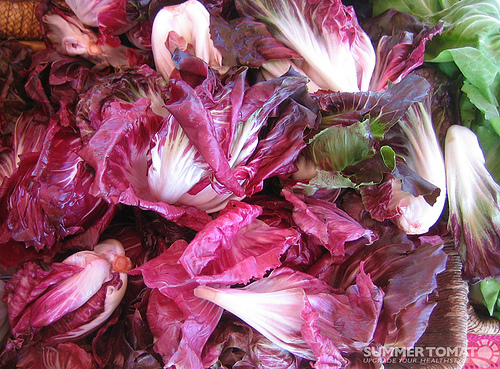 Prosciutto di San Daniele DOP ham is considered the finest in Italy and is sometimes made from dark-coloured, free-range pigs. The town of San Daniele offers the perfect microclimate for the aging of the hams. Prosciutto di Sauris IGT and Prosciutto Carsolino (from the hilly Carso region north of Trieste) are other pork specialities. There are special breeds of beef (pezzata rossa friulana), lamb (Martignacco), and goats raised in Friuli. Freshwater and saltwater fish are all found here, including eel, pike, tench, grayling, shrimp, trout, monkfish, scorpion fish, wolf fish, and San Pietro fish. 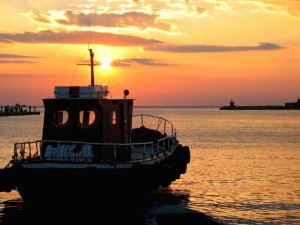 The dishes from the mountains tend to be robust, flavourful, and simply prepared while those from the plains are more subtle. Salumi are always popular and many dishes are characterized by their use of smoked prosciutto and ricotta cheese. One of the region’s most famous desserts is la gubana, a sweet bread originating from Slovenia and now found around Gorizia, that is a mixture of fruit, nuts, and spices rolled in dough. 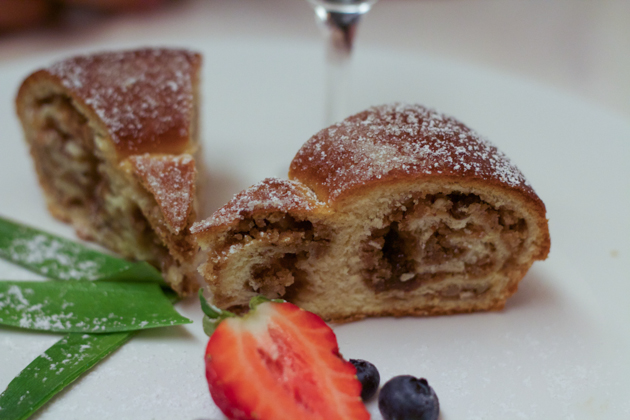 Typical dishes include dumplings made of pumpkin, stale bread or potatoes. The traditional local pasta, cialzones, can be stuffed with smoked ricotta cheese, herbs, dried fruit, nuts, chocolate, spices, meat, eggs, or cheese. In the areas near Slovenia, gnocchi di prugne are still popular and can be served as a first course or as a dessert. They are potato dumplings stuffed with plums. Frico, a combination of melted cheese, potato and egg, is from this region and is very popular. Jota is a local meat soup that is usually eaten in winter. 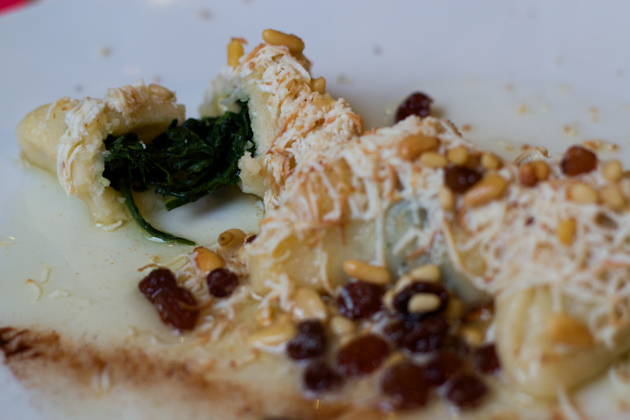 Polenta is still eaten in Friuli as the main starch. It can be served as a first course or as an accompaniment to the meal, like bread. Polenta can be grilled like toast and eaten with cured meats or cheese, or served as porridge with cheese, game birds, pork, or fish. Meat is often enjoyed roasted or grilled in an open hearth (fogolar). Pork is a much-prized meat in Friuli. Many small farms still fatten a pig for slaughter in winter. Typical pork dishes include beans and pasta cooked in a terracotta pot with cotiche sausage, beans with snout, trotter, and bondiola boiling sausage, and grilled pork. Grilled meat in general is popular, including spit-roasted chicken, beef, lamb, and veal. Bollito misto (boiled mixed pork cuts, some smoked, and including muset / musetto (boiled sausage made from pig’s head)) is another popular dish, often accompanied by brovada. Brovada / Brovade / Broade is turnips that have been fermented in wine lees for up to three months, served as is or sautéed with lardo and garlic or with musetto broth. 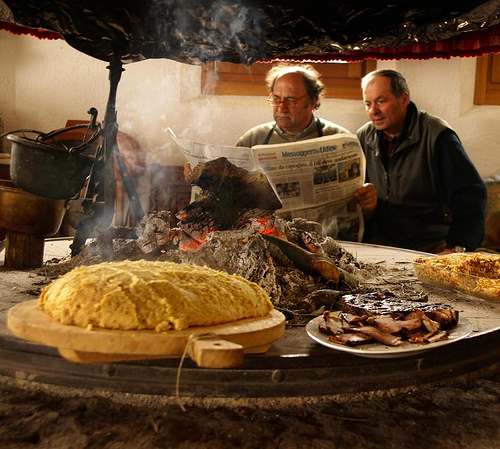 Polenta on a fogolar (traditional Friulian fireplace) by Elido Turco

Food from coastal Trieste and Grado is focused on seafood. Special scampi from Quarnaro and granceveli (spider crabs) are prized here.  Conocie in busara (mussels gratinéed in herbed breadcrumbs and cooked in wine) are traditional. Trieste’s cuisine also reflects its location as a crossroad between Austrians, Hungarians, Slovenians, and Croatians with a Jewish influence as well. Dishes reflecting this cross-cultural influence include: gulasch (a Hungarian beef stew), porzino / porcino (boiled pork with mustard), Viennese sausages with sauerkraut, the Easter dish of cooked ham with cren (horseradish sauce) and pinza (focaccia), gnocco gigante (a steamed dumpling made of breadcrumbs, flour, eggs, butter, salt, and ham from Austro-Hungary), and liptauer (an Austro-Hungarian dish of creamed butter, ricotta, onions, capers, cumin and paprika).

The desserts feature fillings made of fruit, with almonds, spices, honey, raisins, and dried fruit stuffed inside fruit as well as pastries such as strucolo, presnitz, and putizza. Roasted chestnuts boiled with fennel seeds are served with wine in the winter. Strucolo, borrowed from the Austrians, is made well here. See recipes here. 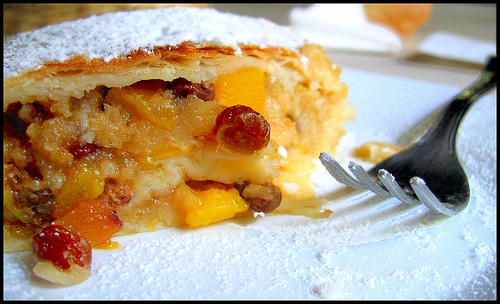 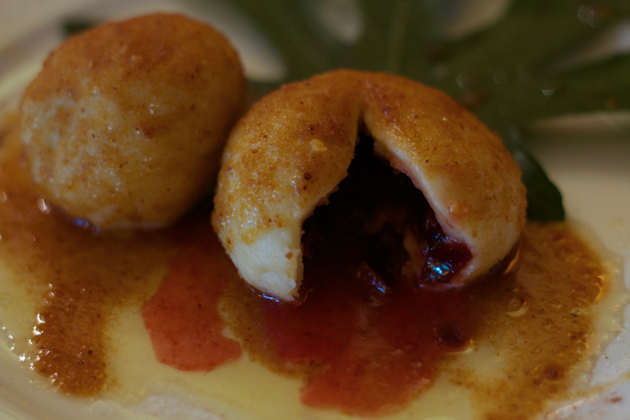 Beer and wine are both enjoyed with meals. The region is most famous for white wines, particularly from Collio/Collio Goriziano, Colli Orientali del Friuli and Friuli Isonzo (Rive Alte). Producers to look for include Felluga, Silvio Jermann, Gravner, Lis Neris, Ronco del Gelso, Venica & Venica, Vie di Romans and Vigne di Zamo.  Friulians prefer their white wines to have a high alcohol level so check the label if you don’t share this preference. There are also some nice red wines produced in Colli Oriental del Friuli by producers such as Fantinel and Le Due Terre. Grappa is popular in this region and is used in resentin (when you rinse the cup with grappa after you drink coffee). 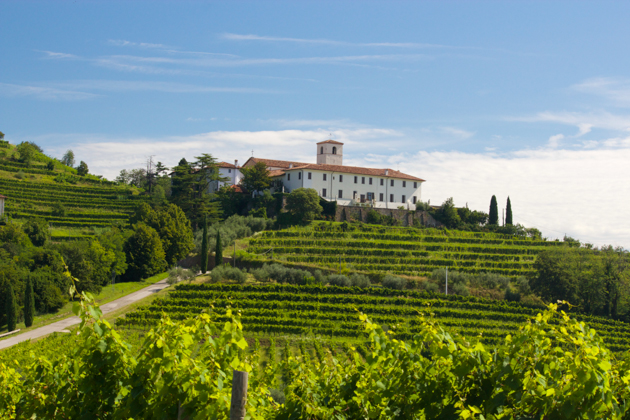 Typical local dishes in Friuli-Venezia Giulia include (the most typical dishes are written in bold):

Prosciutto di San Daniele DOP (cured ham, including those of free-range pigs. It’s considered the finest in Italy and is my favourite)

Salame d’Oca (salami made from goose, in a method similar to pork sausages)

Frico / Fricco (cheese melted with mashed potatoes, bacon, onion, and Montasio cheese, may be served crisp made with latteria cheese)

Marcundela (boiling sausage made from pork with pig’s innards, sometimes with garlic and wine, boiled in red wine or fried in a skillet)

Orzotto con zucchine e funghi (salad of emmer wheat grains mixed with zucchini and mushrooms, can be substituted with other vegetables such as sclopit or asparagus)

Sardele in sesame (marinated sardines in herbs and spices)

Blecs (buckwheat pasta which can be served with rabbit ragu, cockerel sauce or ragu of red deer)

Conocie in busara (gratinéed mussels with herbed breadcrumbs in wine)

Frico con polenta (cheese with polenta, sometimes with potatoes instead of polenta)

Gulasch (Hungarian beef, onion, and paprika stew, may also be made with pork, lamb, venison, or game)

Brovade / Broàde (white turnips fermented in wine must, served as is or sautéed with lardo and served with boiled sausage)

Potate in tecia (boiled potatoes with onion, lardo, and broth)

Zastoch (fried boiled mixed vegetables such as potatoes, pumpkins, and beans with lardo and onions)

Dobos (layered cake with buttercream, chocolate cream, or ganache and covered with caramel and buttercream)

Pinza (a yeasted cake, similar to panettone without dried fruit)

Presnitz (Easter cake made of pastry rolled with dried fruit, sugar, and rum)

Rosada / Rosade (custard made with grappa and sometimes almonds)

Latteria (a semi-firm cow’s milk cheese; “latteria” was traditionally the name for any cheese made at the community dairy)

Malga ( semi-mature to mature mixed cow’s, ewe’s, and goat’s milk cheese which has been produced in the mountains of Udine and Pordenone since ancient times)

Montasio DOP (a firm, semi-mature to mature cow’s milk cheese which originated in Carnia and named after a group of mountains in the Julian Alps, today it is produced in Friuli Venezia Giulia and Veneto; Montasio is marked with the consortium stamp, the date of production, and the dairy code)