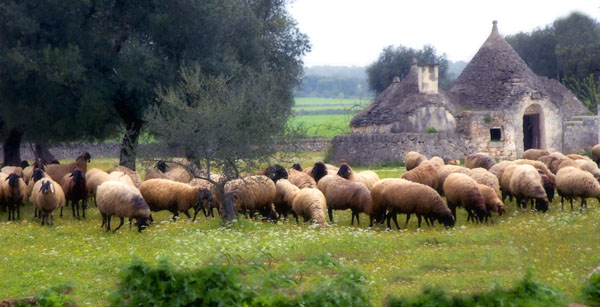 Once part of Magna Graecia, Puglia (Apulia) borders Campania and Basilicata to the west and the Adriatic and Ionian Seas to the east and south. It is a beautiful region with white sandy beaches and unique architecture in the form of conically-shaped dry stone huts called “trulli” that hark to the Bronze and Stone Ages. The interior geography of Puglia is made up of plains and low hills with the limestone Gargano Promontory forming its northern sub-region. Sometimes called the spur on the heel of Italy’s geographic boot, Gargano is actually part of a 30,000-acre national park that juts into the Adriatic. Essentially, Puglia is Greek in spirit both because of its relative isolation from the rest of Italy and due to its close proximity and historical connection to Greece. Because it is separated from outlying regions by the Apennine Mountains on its eastern border the strong Greek influence on the culture and cuisine has endured. 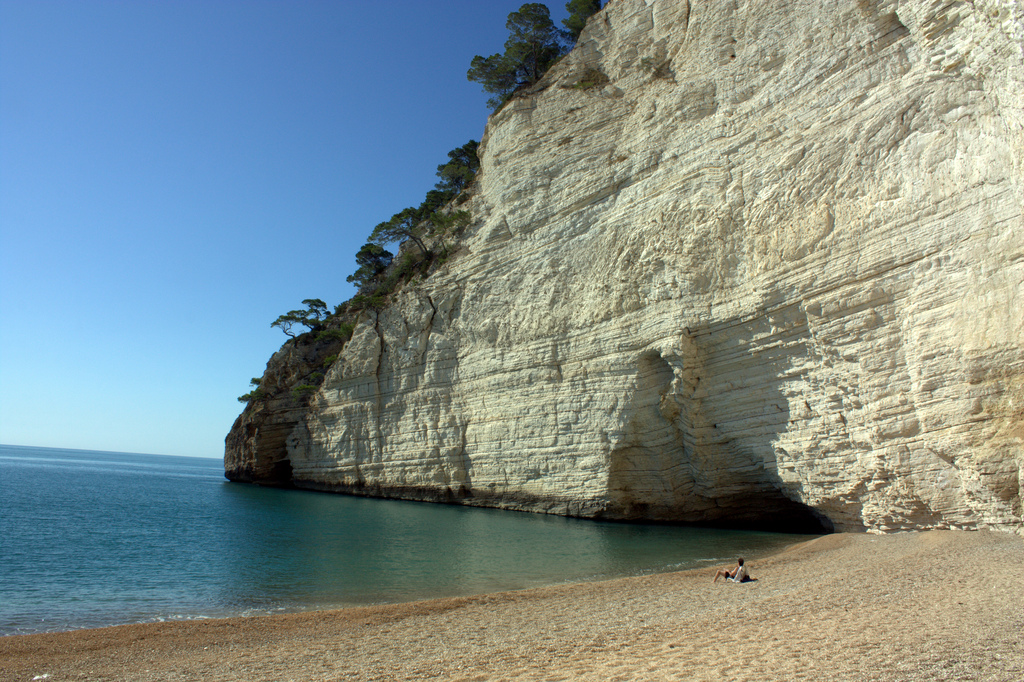 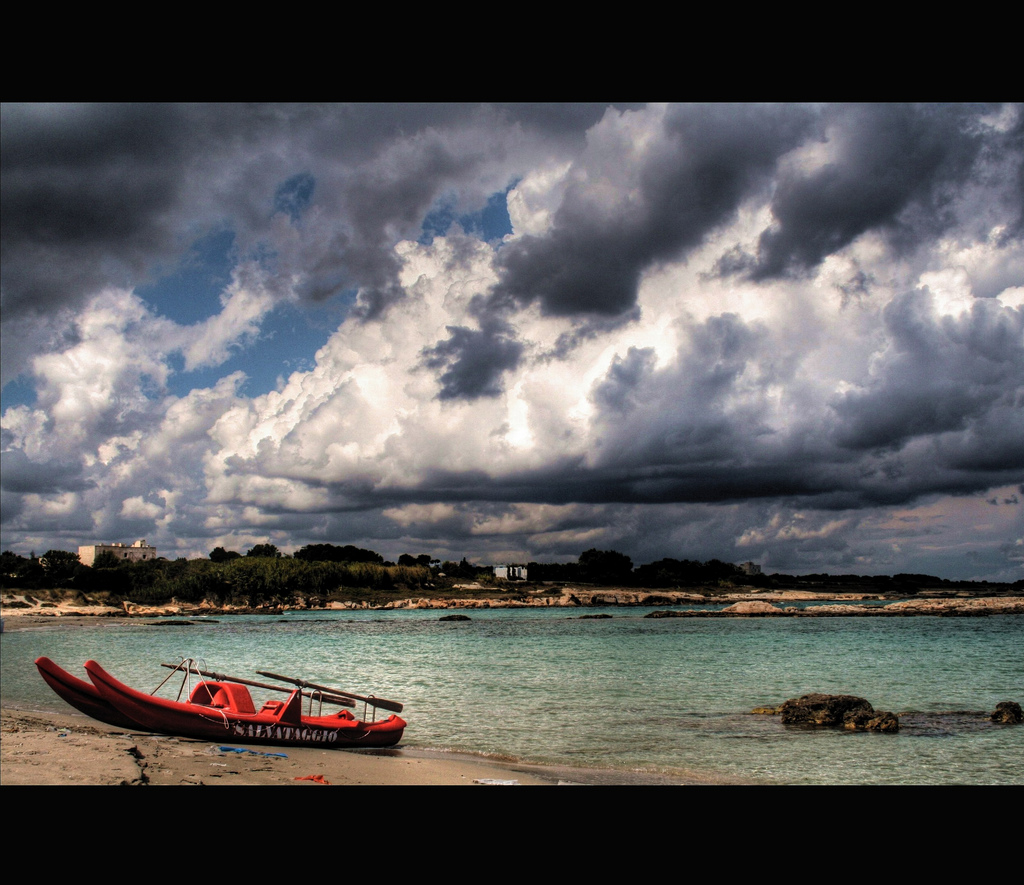 Clouds by Cinzia A Rizzo

Apulians are known for seldom smiling but also for being very generous, honest, and frank. They are known for giving a rough first impression but once you earn their friendship and trust, they will share whatever they have with you, no matter how little. 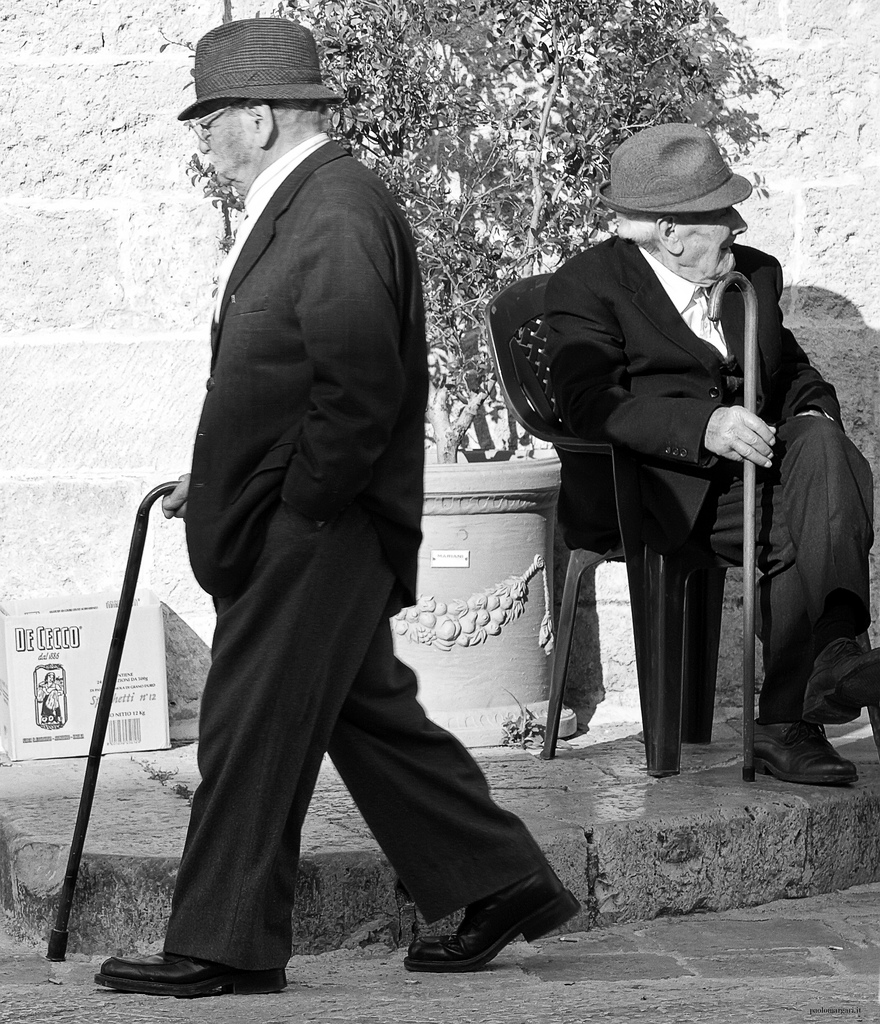 Puglia is known as the garden of Italy, as the land is fertile with mild winters and long summers producing excellent vegetables, fruit, wine, nuts, olives, grain, and cheese.

The coastal drive between Barletta and Peschici is particularly scenic. Near Barletta there is Castel del Monte (a 13th century Norman castle). South of Bari there are the Grotte di Castellana, karst limestone caves stretching more than 3 kilometers long. 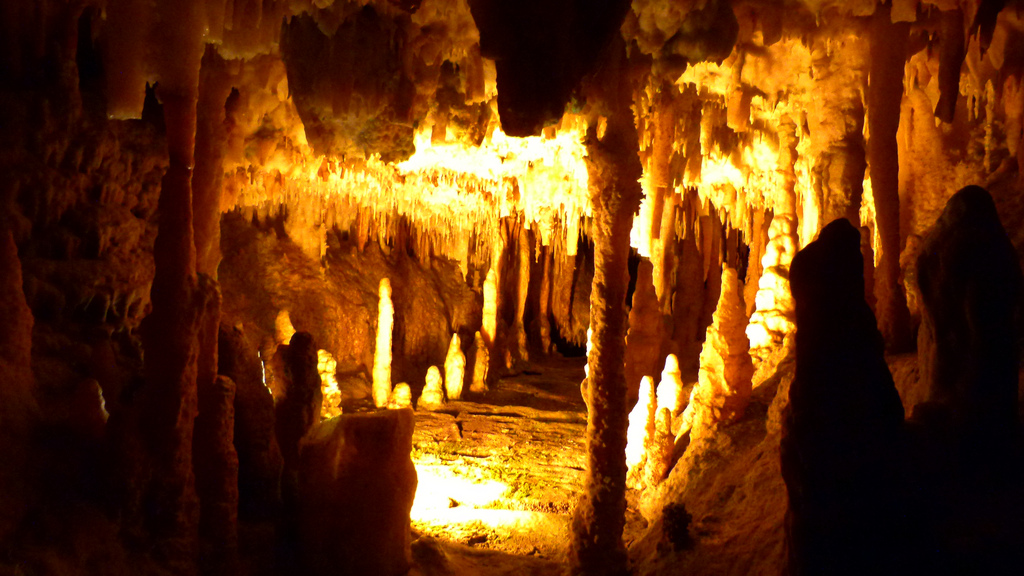 The conical houses, known as Trulli, in Terra dei Trulli (the region between Fassano, Ostuni, Martina Franca, and Albarello) are remarkable in their architecture with their characteristic mushroom cap roof. Albarello, where one finds exceptional examples of these ancient dwellings is a World Heritage Site and a good place to visit the Trulli. 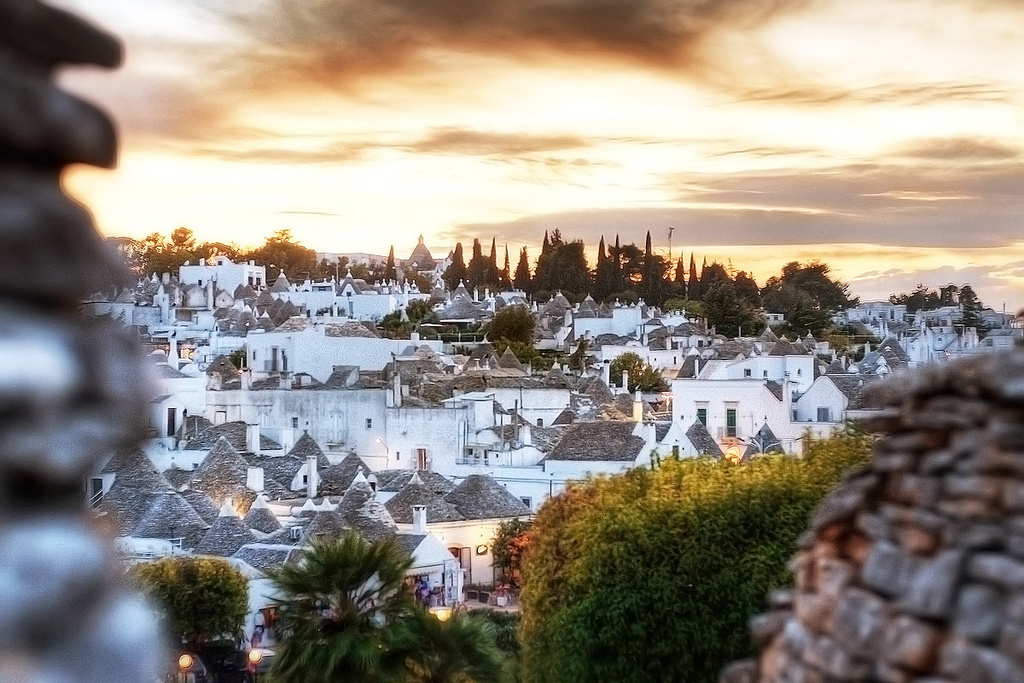 Trulli in Alberobello by Luca Moglia 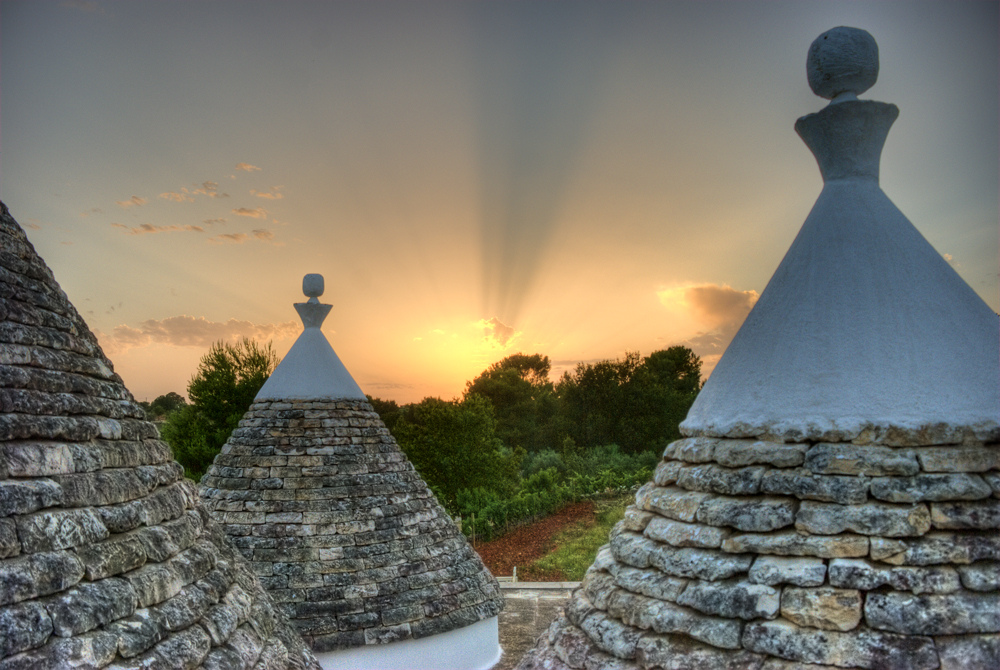 The Promontorio del Gargano (Gargano Promontory) is a stunning corner of Italy with  its limestone point jutting out into the sea. The coastline (Vieste) and the forests (Foresta Umbra) are worth exploring, and a boat trip around the Tremiti Islands would never be forgotten. Nearby is the town of Foggia, especially notable as it is where my husband’s grandfather comes from! 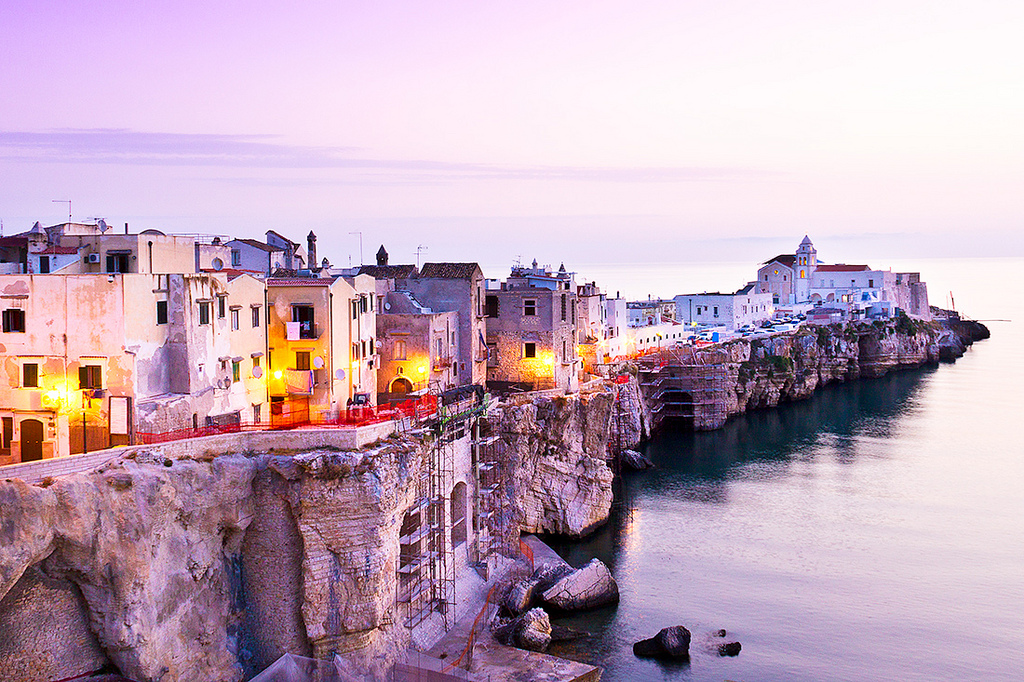 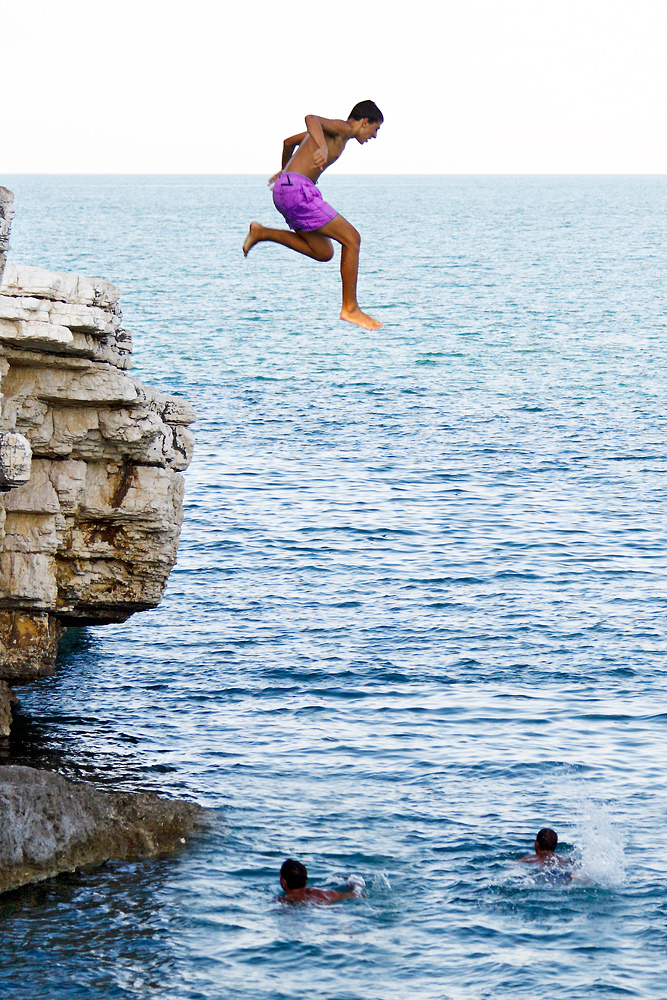 Jumping in the Sea by Castgen 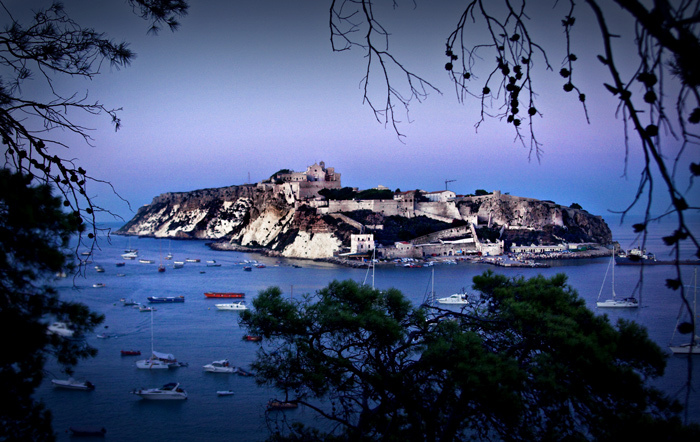 Lecce, a Roman town with a Baroque historic centre, is a gem among many in Puglia. In particular, the old town (Baroque Lecce), the Basilica di Santa Croce (Church of the Holy Cross) and the Piazza del Duomo (Cathedral square) should not be missed. 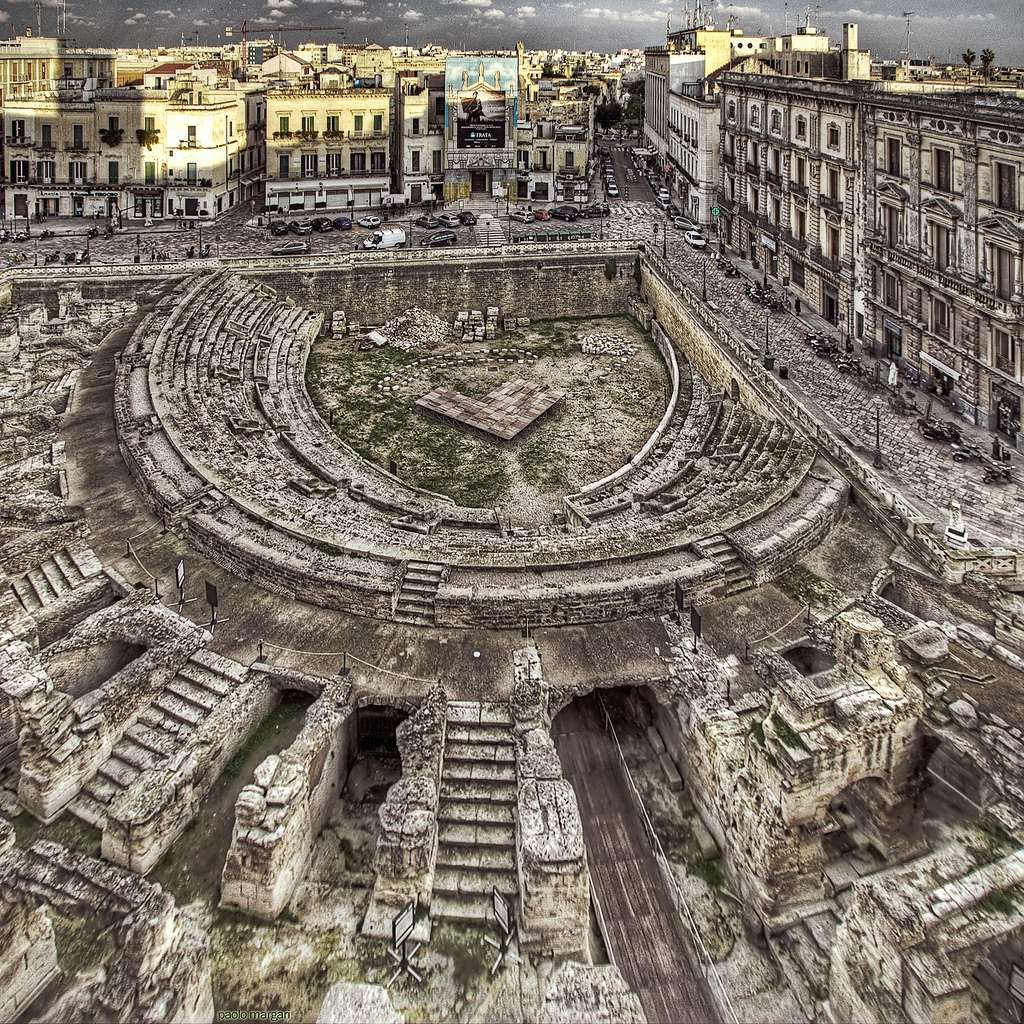 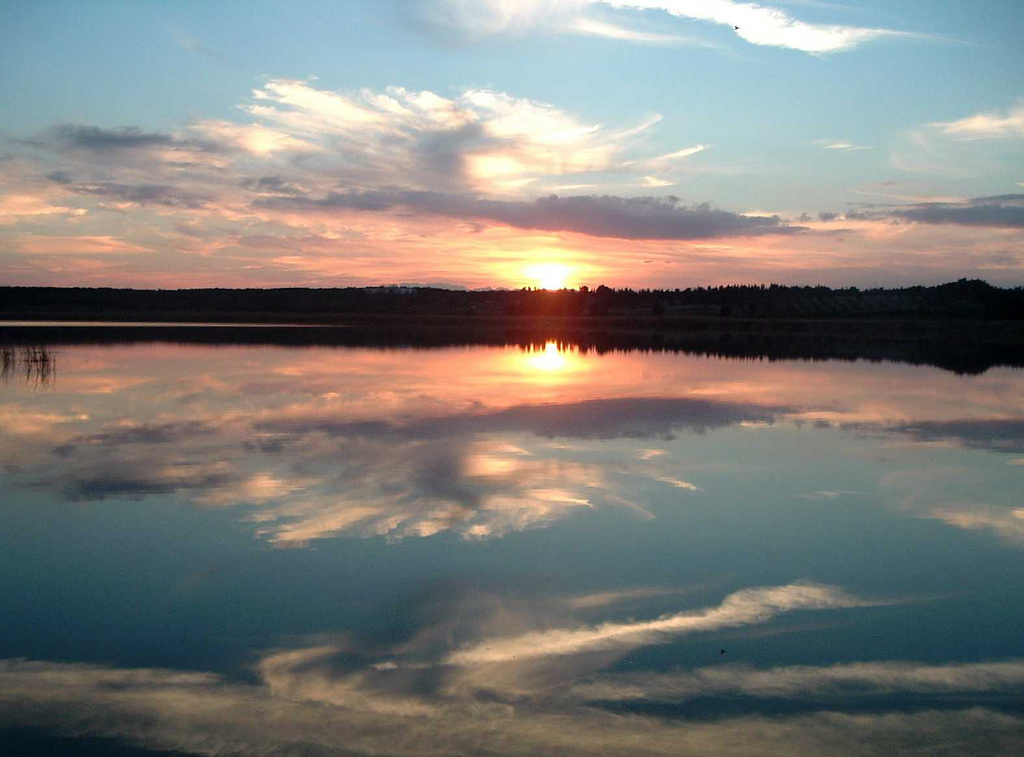 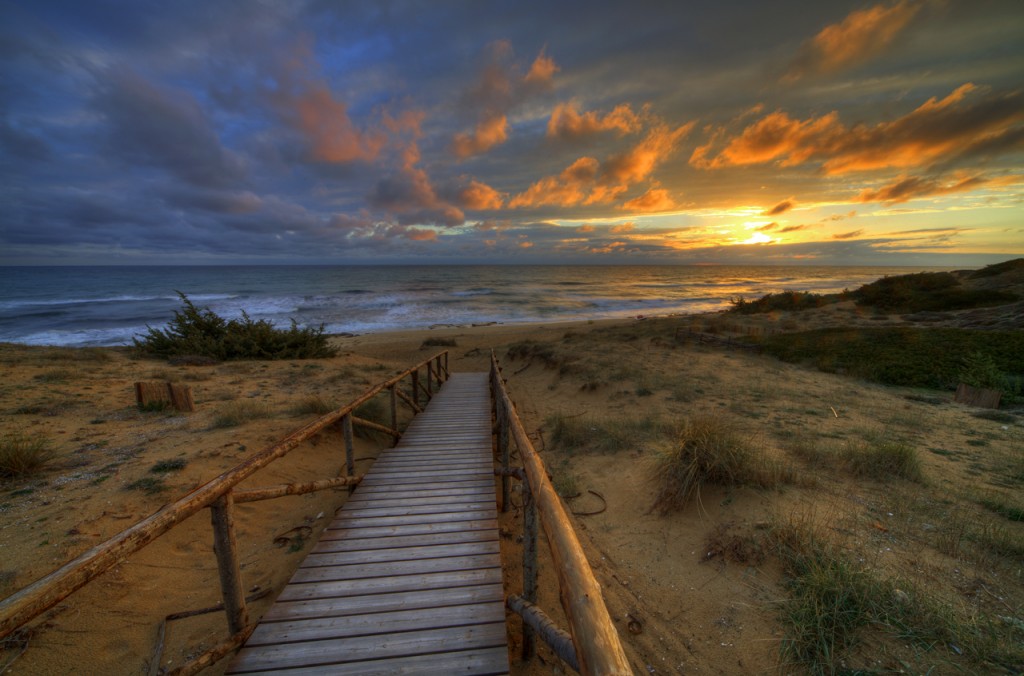 The ingredients used in Puglia reflect a land of shepherds, farmers, and fishermen. The most iconic ingredient in Puglia is the plum tomato. Other typical local ingredients include lamb, olives and olive oil, cheeses from Andria and Gioia del Colle, vegetables from Salento, and oysters and mussels from Taranto. Puglia is Italy’s largest olive oil producing region. Apulians like to dry local vegetables such as aubergine, tomatoes, onions, peppers, lampascioni (wild grape hyacinth bulbs), and green and black olives and then preserve them in olive oil infused with oregano. There are some regional differences within Puglia such as that garlic is preferred in the north, a mixture of onion and garlic in the centre, and onion is preferred in the south. 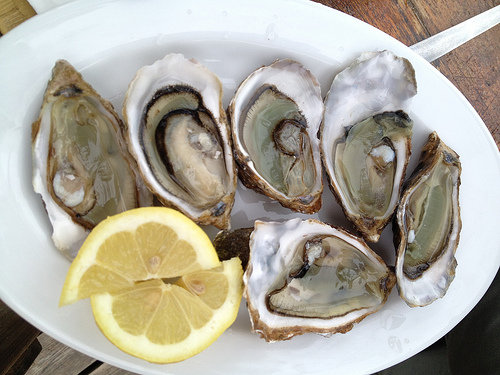 Durum wheat is grown in Puglia, so bread and dry pasta are important. There are also many types of rustic homemade pastas which tend to be made without the addition of egg to the dough.  Signature shapes of the region are cavatieddi, orecchiette, troccoli, chiancaredde, and strascinati. Apulian breads are considered to be particularly tasty and since they are made with durum wheat they tend not to go stale as quickly. 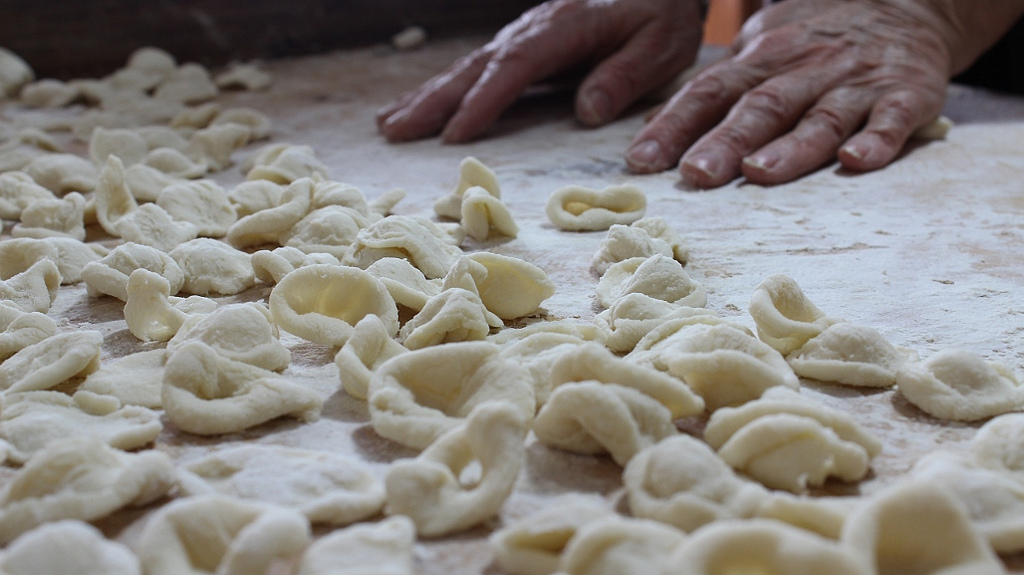 The cooking in this region is a reflection of its pastoral, agricultural, and maritime history. This cooking, with its roots in the peasant way of life, is affectionately called “la cucina povera” (cooking of the poor) by locals. But in its variety and richness of flavours, we can say that it is the poor man’s feast.  Taralli or friselle, small, hard, baked rings of bread, once an essential food to take to sea or to have on hand in hard times, are Puglia’s ubiquitous snack food today. Pasta is much loved here, as well as soups and rice. For recipes from Puglia, see here. 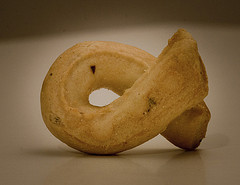 One cooking method which was created from the need to have something on hand for dinner after a long day working in the fields is the tiella or teglia– a dish where ingredients such as fish, potatoes, rice, vegetables, cheese, and shellfish are combined with water or broth, olive oil, herbs, and garlic or onion and baked slowly in an oven.

Many of these dishes were traditionally cooked clandestinely in bakers’ ovens. Historically, ovens were illegal due to the risk of fire but also because the government ovens provided a source of revenue for the state. Illegal structures were often constructed in the countryside to circumvent this regulation. 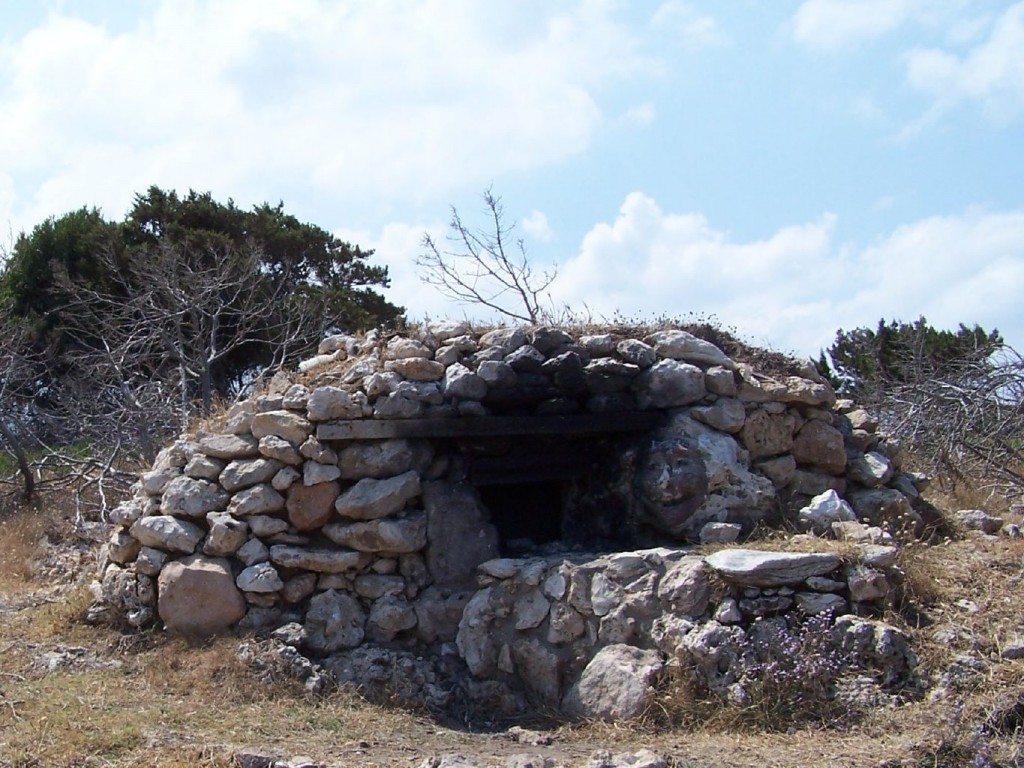 Unlike most of Italy, Apulians mix the pasta course with the main course in dishes such as pasta served with stuffed aubergines or peppers, pasta al forno (baked penne or ziti moistened with tomato sauce and combined in a casserole with meatballs mozzarella cheese, then topped with more tomato sauce and pecorino cheese), lanache di casa (fresh tagliatelle pasta served with stuffed mussels), or orecchiette with lamb shanks, tomato, and aged pecorino cheese.

Fish and seafood are eaten more often than meat and are usually prepared baked, fried, or in the tortiera (a layered casserole) in many different versions.  Feasts are comprised of roasted lamb or goat, cheese, wine, and dessert. There are many desserts which have a Greek influence like those made with honey like carteddate (fried, ribbon-like strips of sweet dough), with almonds like mustazzueli (almond biscuits) and cupeta (almond brittle), and those made with ricotta like cassata.

There are also nice rosé wines made from Negro amaro and Primitivo grapes which should be enjoyed young. Good producers of rosé wines include Leone de Castris and Rose del Golfo.

A list of typical dishes from Puglia (the most classic dishes are written in bold):

Taralli (crunchy ring-shaped biscuits which can flavoured with chilli or fennel seeds; taralli dolci refer to sweet taralli, served for dessert or as a sweet snack)

Benedetto (hard-boiled eggs with soppressata or salami, ricotta, and orange – traditional for Easter)

Pasta infornata (penne or ziti pasta layered with a sausage, tomato, and basil sauce, meatballs, and mozzarella and pecorino cheeses)

Bombette (pork cutlets stuffed with pecorino cheese and parsley and either breaded and fried, broiled, or baked)