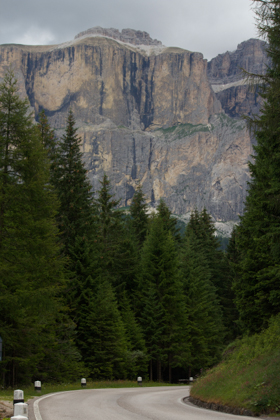 Green valleys are dotted with yellow, pink, purple and white wildflowers. Towering over are awe-inspiring mountains of sheer rock. Charming wooden houses straight out of Hansel and Gretel peek out from behind trees. Each twist of the road brings an even more spectacular panorama into view. This is the Strada delle Dolomiti (the Great Dolomite Drive) a 210 km drive from Bolzano to Cortina d’Ampezzo, passing through 3 regions (Alto-Adige, Trentino and Veneto). 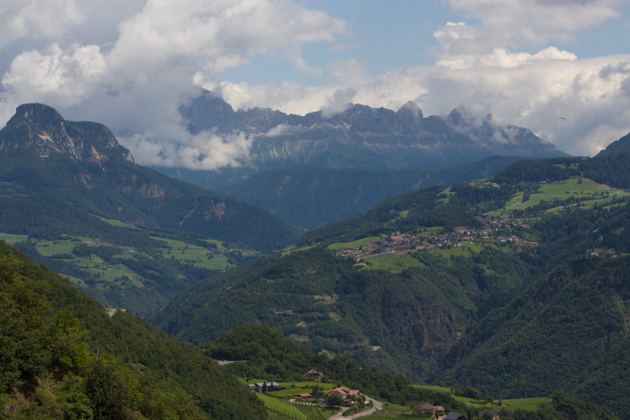 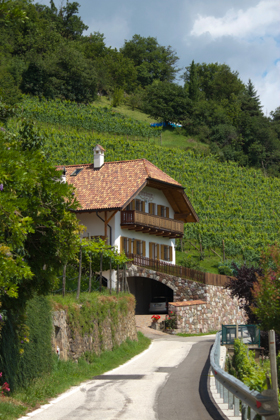 The drive is best done over 2 days to really enjoy it. We drove first from Bolzano in Alto-Adige to Canazei in Trentino and the next day from Canazei to Cortina d’Ampezzo in Veneto. 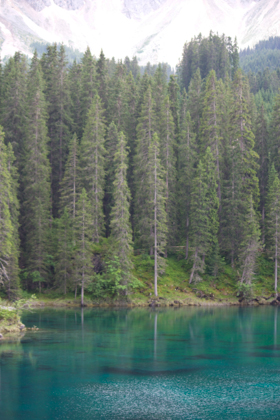 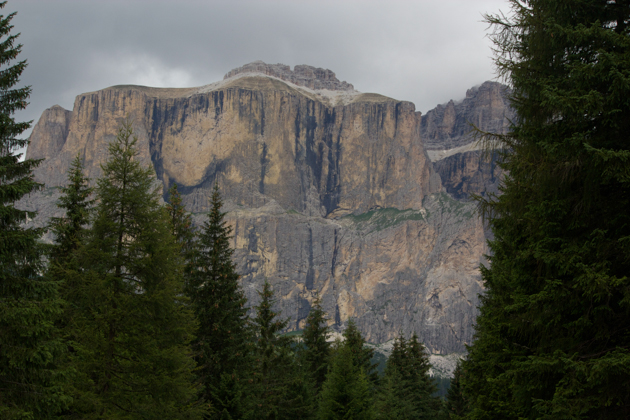 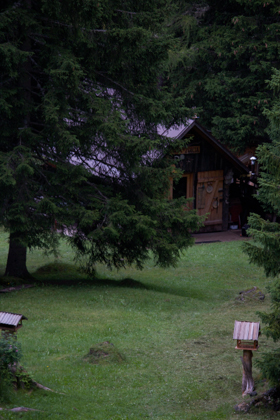 Our first stop is at Lago di Carezza (Carezza Lake), reputedly the most beautiful alpine lake. Although I have not seen all the alpine lakes, this one would be hard to trump. It has a surreal, glowing blue-green water, which is surrounded by coniferous trees set against the Dolomites in all their glory. We had just arrived when the skies opened and a downpour of rain drenched us. This cloud sadly followed us throughout our journey although parted occasionally to give us fleeting glimpses of the spectacular scenery. 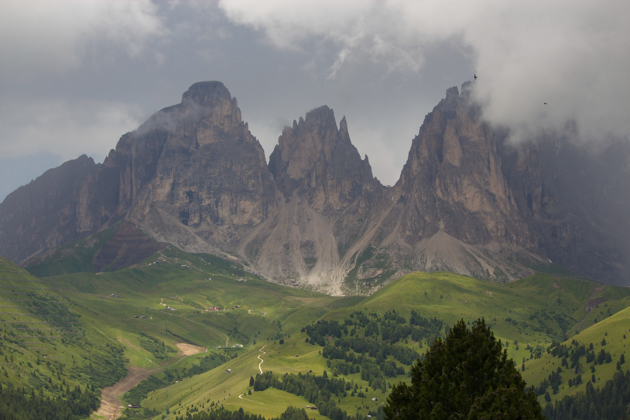 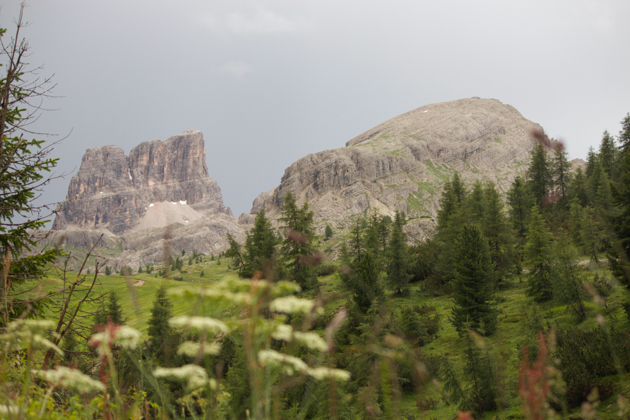 Next, passing the Vigo di Fassa (a popular ski area), we arrived in Canazei. Canazei is in the centre of the massif, surrounded by the Catinaccio, the Torri del Vaiolet (Towers of Vaiolet), the Sella Massif and the Marmolada (the highest massif in the Dolomites with a cable car departing from Malga Ciapela offering panoramic views from 3,265 m). 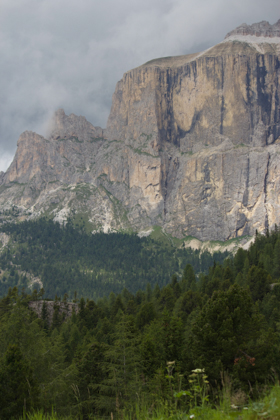 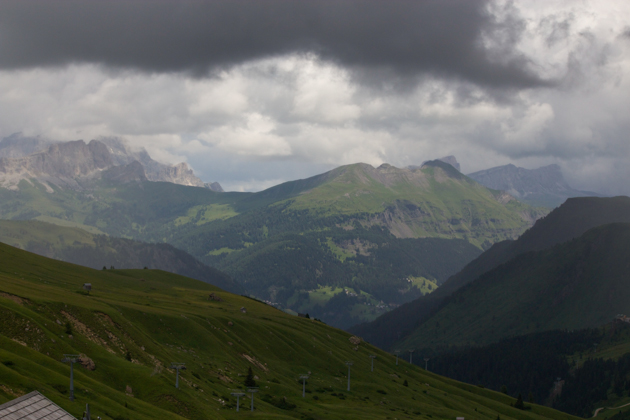 The Catinaccio Mountain is called “Rose Garden” (Rosengarten) in German due to the colourful pink light it displays at sunset. Legend has it that the Dolomites are pale coloured because a prince who lived in the Alps went to the moon and fell in love with the daughter of the moon. They married and went back to live on earth but she was disturbed by the dark mountains and missed the paleness of the moon so she returned home. Some dwarves helped the prince by weaving nets from moonlight to cast over the mountains to make them pale so that his wife could return. The dwarves were allowed to live in the kingdom for having helped him. 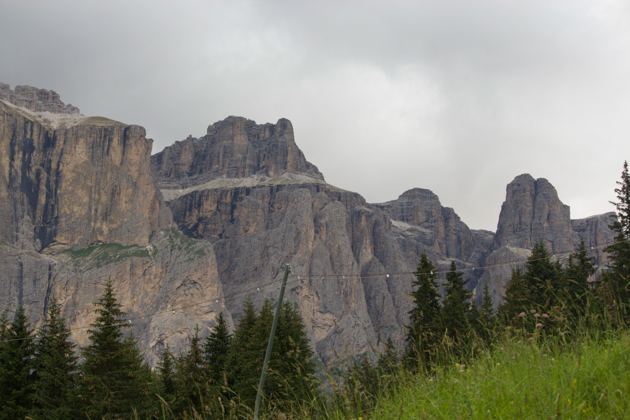 Subsequently, the king of the dwarves had a rose garden, which reflected the light of the sun off the pale mountains and gave off a strong pink glow. The king fell in love with and abducted a local princess but was then captured in his rose garden by knights sent to rescue the princess. The king of the dwarves felt that his garden had betrayed him and he then cursed the roses to not be seen during the day or at night. The curse did not include the time between day and night however and so these startling pink and purple hues can be seen only as the sun sets.

Outside Canazei is the Passo Pordoi, the highest pass on the Strada delle Dolomiti at 2,239m. It is also the departure point for a funicular to the Piz Boe peak at 3,000m, the tallest in the Sella group and offering one of the best panoramas in Europe. It was sadly covered in clouds at the top when we visited.

Just north of Canazei is the Passo di Sella (a pass offering breathtaking panoramas) and Val Gardena, notable for its beauty, woodworking and the Ladin dialect spoken there (a dialect born during Roman times which only 30,000 people still speak today). 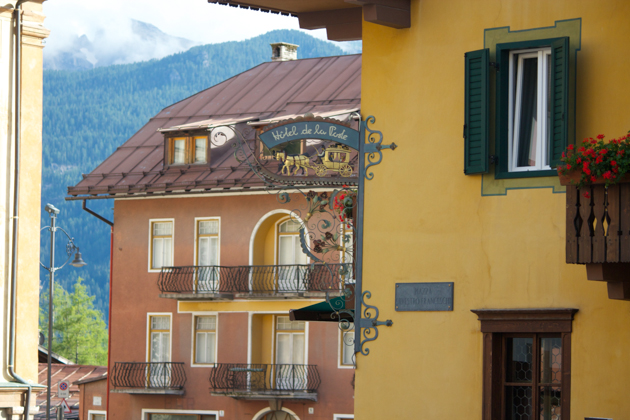 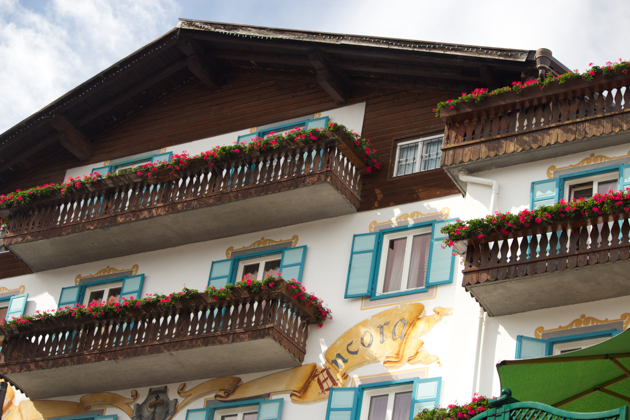 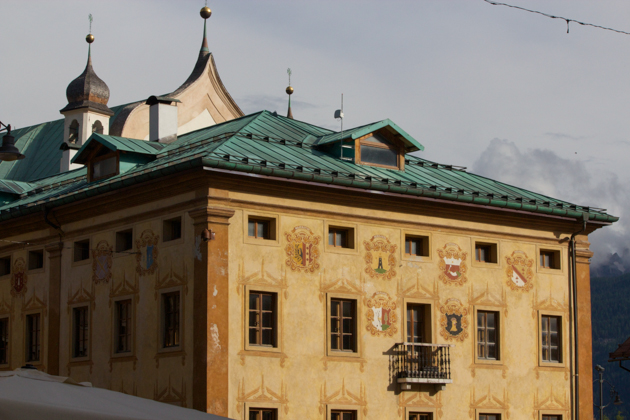 While the Strada delle Dolomiti offers some of the most spectacular scenery in the world, what we were really looking for was mountain hospitality…like the one we found at Baita Fraina outside Cortina d’Ampezzo. Cortina d’Ampezzo is the capital of the Dolomites and a jet-set ski destination. On offer are luxury accommodation, designer shopping and fine dining. Baita Fraina was definitely a highlight of our 3-month tour dining in more than 150 restaurants. We arrived for lunch and found a cozy corner in their charming dining room. We wanted almost everything on the menu and the wine list was extraordinary in terms of selection, old vintages and value for money. When the food arrived, we immediately asked if we could come back for dinner that day. Everything was exceptional. Particularly delicious dishes included mushroom ravioli (casunziei ai porcini) and pasta and main courses made with venison and lamb. A perfect ending to the perfect meal: we walked out of the restaurant onto a large open lawn with a playground and spotted a deer. 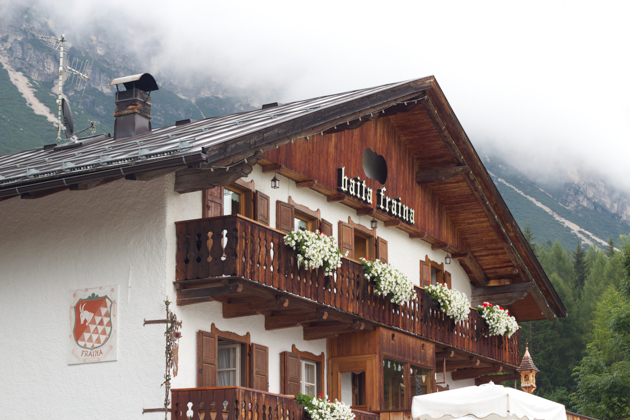 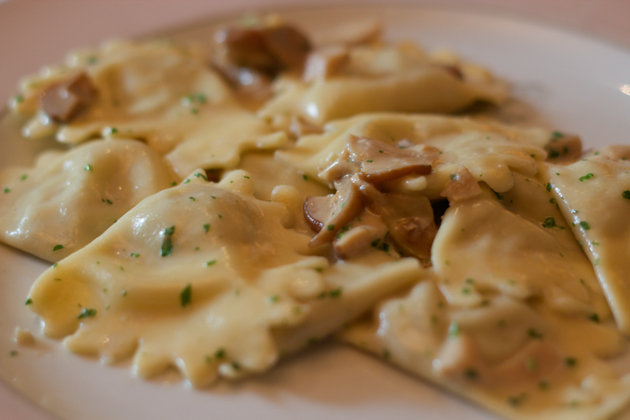 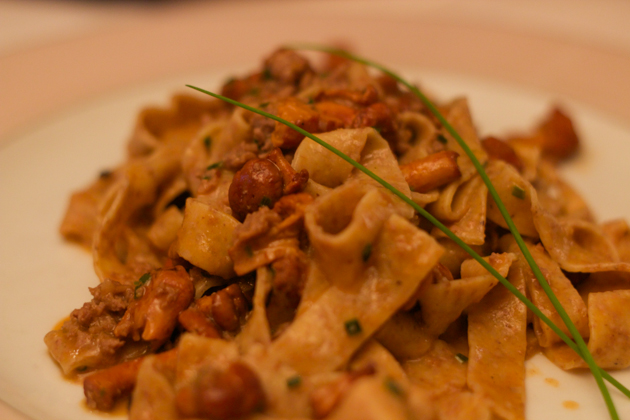 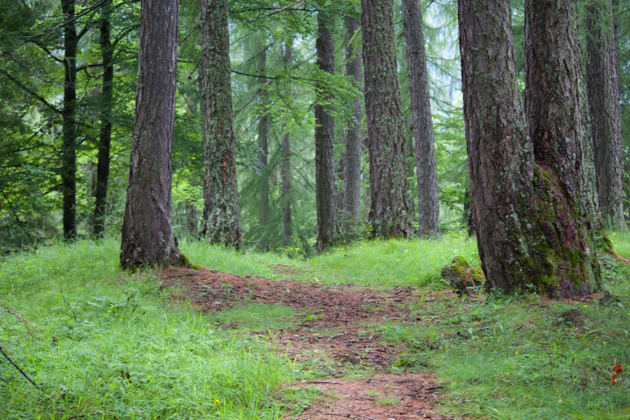 Forest in front of Baita Fraina 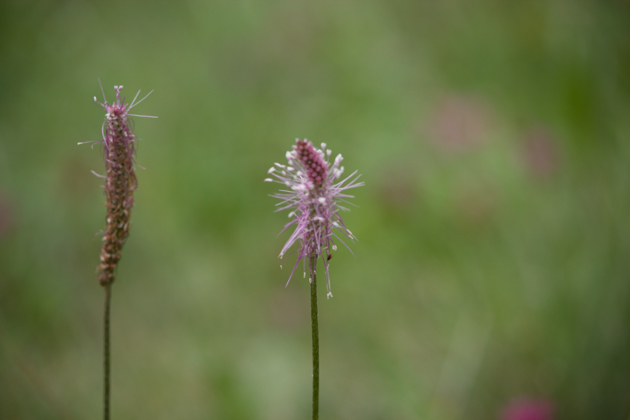 The other great discovery during the trip was the delicious pastries we tried along the way. There were a myriad of combinations of pastry or cake layered  with cream, apples, chestnut paste and chocolate. 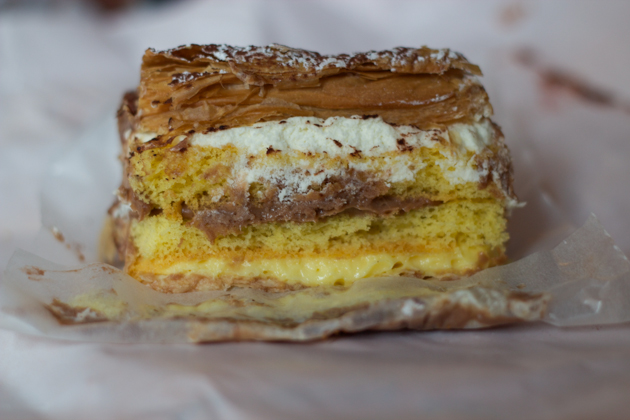 Cake and pastry layered with chocolate custard and cream 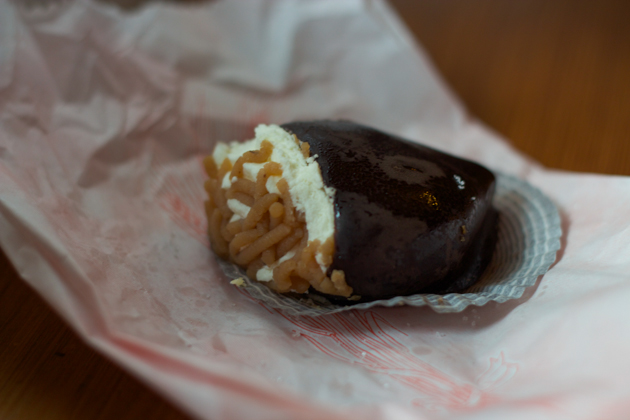 Pastry filled with cream and chestnut paste dipped in chocolate 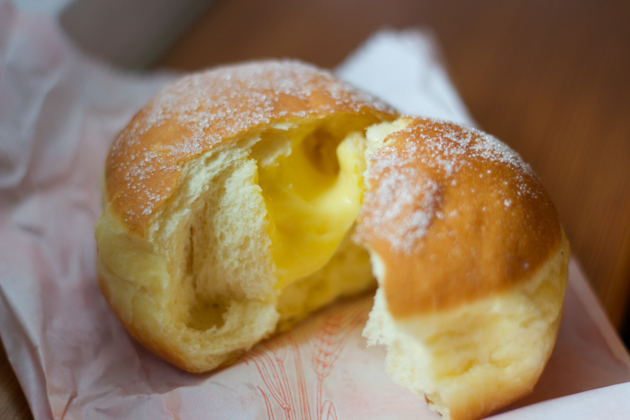 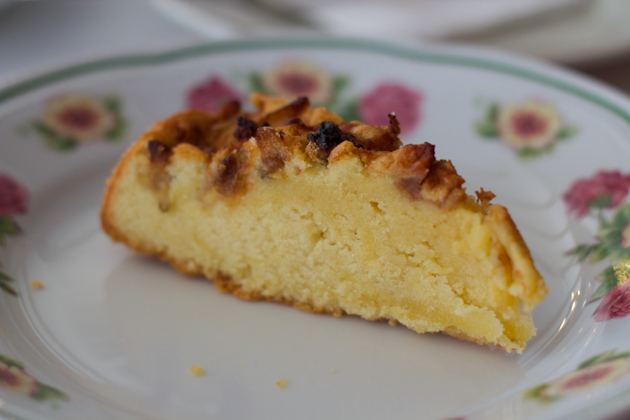 As it may be some time before we can return to Baita Fraina, we have been searching for a recipe for venison with lingonberries. The following recipe is from the book La Cucina nelle Dolomiti by Anneliese Kompatscher.

Cut the venison loin into 10 pieces of 60 grams each. Lightly tenderise with a mallet. Thread the Speck fat through the loin with a needle. Sprinkle the venison with salt, pepper and flour.

In a frying pan, heat well with oil. Add the venison and brown on both sides, leaving the interior pink. Remove the meat from the pan and keep warm. Use a paper towel to remove the excess oil and add the brandy. Pour in any juices which have escaped from the venison. Add a bit of broth and bring to a boil. Mixing well, add butter. Place the venison on the plate and pour the sauce over. Serve with lingonberry jam. 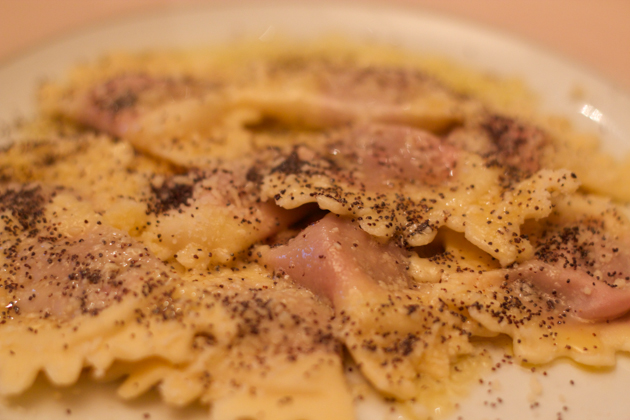 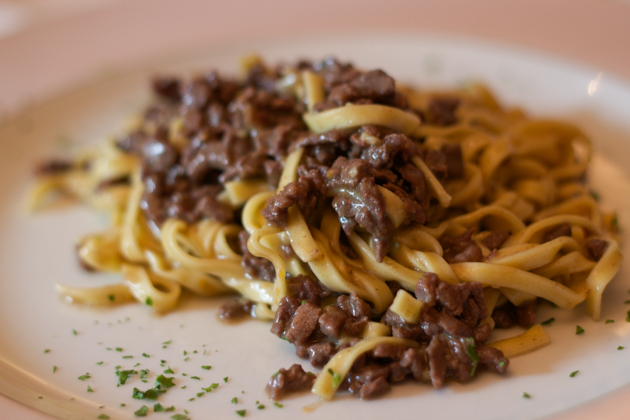 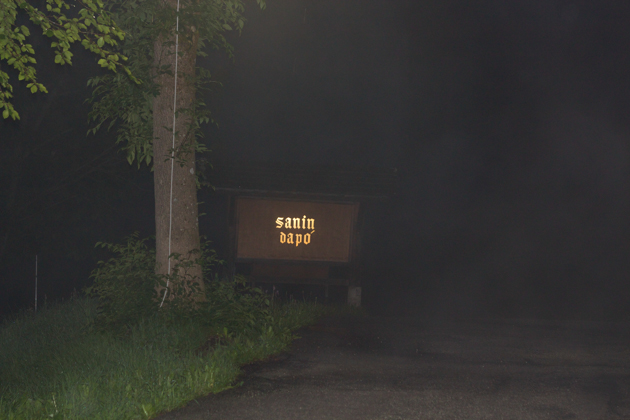 This is one of my favourite restaurants in Italy. Just outside Cortina d’Ampezzo, it has the perfect mix of country charm, professional yet down to earth hospitality and excellent food. Did I mention the amazing wine list with equally amazing prices? They also have a great lawn, children’s playground and forest to run the wee ones before lunch. They also rent out rooms. We are already planning our return.