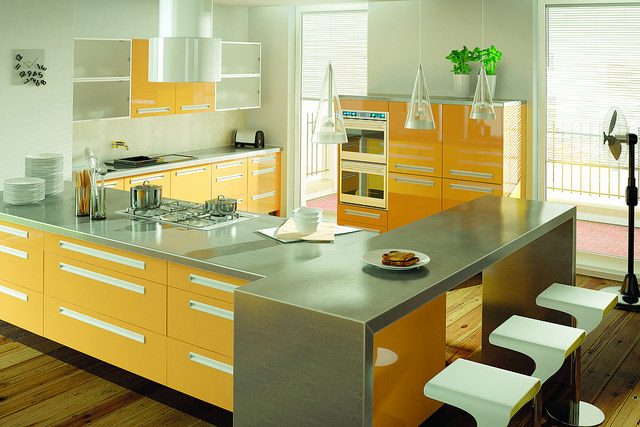 We are buying a home. As I am obsessed with food and cooking, in my mind I have always been planning my dream kitchen. Every time we go to a friend’s house and I spy a faucet that can dispense boiling water or stay in a holiday rental which has kitchen appliances which roll out from a cabinet, I make a mental note. What will the kitchen of the future look like? I believe a bit more like a science lab. Let me elaborate. 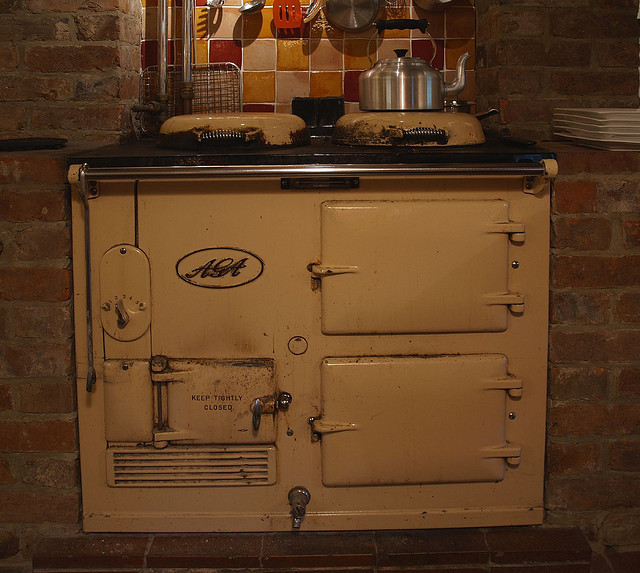 While searching for a home, I realised that my ideal kitchen varies quite a bit from what most homebuyers are looking for. Many of these kitchens come kitted out with a retro feel, perhaps a bit of nostalgia for their grandmother’s kitchen. While I am never one to completely eschew form over function, I do not welcome any kitchen equipment which limits my ability to create. That is why while some people see an Aga cooker and imagine long roast lunches with friends, I imagine nightmare energy bills, cold food all summer long when it goes into hibernation, having to part with some of my favourite cookware in favour of Aga compatible cookware and most importantly, an inability to cook using many of my favourite and more reliable methods.

The Kitchen of the Future 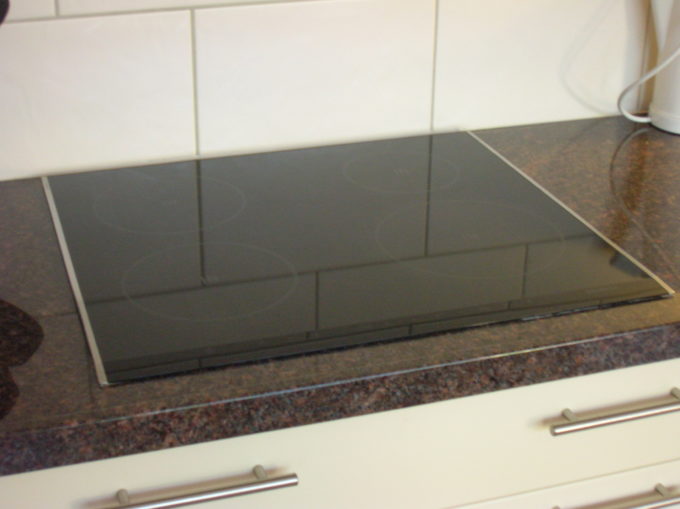 Instead of a traditional cooker, I intend to install a few gas burners and a few high wattage induction burners capable of boiling water within one minute. The very high wattage required means the induction burner needs to be connected by an electrician as the portable induction burners sold individually and plug into the socket are much lower voltage. The beauty of the induction burner is that it can be set to a temperature and very accurately hold that temperature forever, unlike a gas burner. It is also not possible to burn yourself on the element nor does it emit gas, making it safer for families. The downside is that not all pans work on an induction burner. I will still have a few gas burners, and perhaps this is my own element of nostalgia, but I use more of a sense of feel when cooking with gas, watching the level of flame, the ease of control of the flame and the ability to flambe foods to burn off the alcohol. 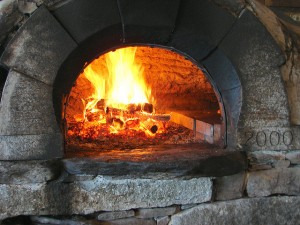 In my ideal kitchen, I would probably have 3 ovens: a steam oven, a traditional oven and a professional baker’s oven. Not to mention the pizza oven in the garden. What I will likely buy is a combi oven that can function as a steam oven and a traditional oven. The steam oven can cook quickly like  a microwave using only steam, deemed safer by some. Using steam to cook also ensures that the food remains moist and meat juicy, while the traditional element of the oven will brown the food. A professional baker’s oven has a stone floor which the bread can be placed directly on. It has a swivel door so that the heat does not escape and is plumbed in so that steam can be added to the oven so that the crust does not form too early on breads, inhibiting it rising.

My first drawer would be for a sous vide. Sous vide, essentially a jacuzzi for food, is a cooking method which has revolutionised catering for large groups of people and has made lesser cuts of meat more popular with chefs. The sous vide is literally a bathtub and the water is heated to a fixed temperature and held constant for as long as you like. The food is placed in plastic bags and hermetically sealed before adding it to the heated water to slowly cook. Because the bags are sealed, many different meals can be added to the water at the same time without affecting the flavour of the other dishes (so long as they all require the same cooking temperature). Because the temperature is low, dishes can stay in there for hours up to days. This makes party planning and menu planning for a family easy because the food can be added two days in advance and the bags removed and opened just before serving. The food is never over or under cooked. Also, you can make extra bags and just cool them down and put them in the freezer for future meals. When you want to use them, just place the bag (from frozen or defrosted depending how temperature sensitive it is) in boiling water to reheat it. The downside of sous vide is that there is no evaporation during the cooking so dishes like ragu alla bolognese become a bit mushy in texture, so I prefer to do this on the hobb/stove.

Using a sous vide also requires a vacuum seal to remove the oxygen from the bags. The more sophisticated vacuum seals are equipped to deal with liquid so that when the oxygen is removed, any liquids (marinades, flavourings, etc) are not also sucked out (and stop the less sophisticated machines from working). The problem is the best of the vacuum seals are chambers where the entire package is added rather than just the top part which gets sealed, and these can be very large. I make due with a smaller, less sophisticated option and just deal with the frustration of having to wipe the machine down and add less liquid than I would like. There is a steam oven which comes with a vacuum seal chamber in a drawer however. 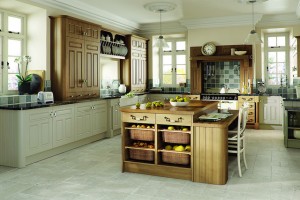 My second type of drawer would be drawers to hold food underneath the chopping area. Some would be refrigerated drawers to keep vegetables easily on hand to be prepared. Drawers also ensure that the food cannot be stacked (nor can anyone come along and leave something heavy on top of something delicate). The refrigerated drawers would be next to the drawer with the bin for any peelings and trimmings to be easily discarded. There would also be wicker drawers for onions, garlic and potatoes as well as a sealed drawer for breads. 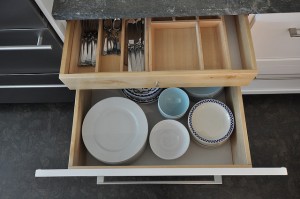 My third type of drawers would be for dishes with the base drilled with indentations to be able to rearrange pegs to keep the plates in place. I much prefer dishes in drawers rather than in cupboards as they are easier to lift and can be stacked closer together as they will not topple. There would also be a plate warming drawer to heat dishes so that food remains warm when served. 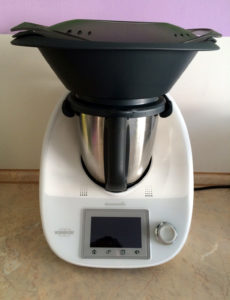 Most of you are probably wondering what a Thermomix is (aka the “Bimby” in Italy). Once you have seen one you will begin to notice them everywhere – on cooking shows, at a friend’s house, etc. The German makers of Thermomix, Voerwerk, have sold more than 7 million machines and are extremely popular in Italy. In Portugal, sales of the Bimby outstrip those of iPads. The genius behind the Thermomix is that it can weigh, chop, puree, cook, steam and stir. I had heard of the Bimby for years but never understood the attraction until I was at a friend’s house and she wanted to make béchamel sauce. She added the flour, butter and milk, set the machine and we went for a walk. When we came back it was finished. The Bimby keeps the temperature constant so that the sauce cannot burn and egg based sauces do not coagulate. It stirs constantly so that the mixture is evenly heated which is perfect for risotto, pastry cream, hollandaise sauce and béchamel. I love cooking but sometimes cooking twice a day every day gets tiresome so being able to add a few things directly to the Bimby to weigh, chop and cook while I do some admin really helps. Then I just add the Bimby and the dishes to the dishwasher to do its work and mealtime is done. Simple. 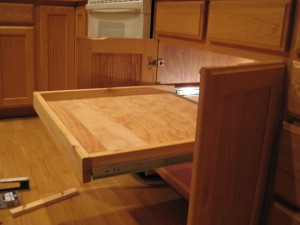 Roll out shelves by Sean Sullivan

The cabinets would have vertical dowels to keep baking trays and pans in place without the need to stack them. Over the door racks would hold pot lids in place.

Other cabinets would hide roll out trays equipped with sockets so I could hide my appliances such as my rice cooker, Thermomix, standing mixer, food processor, toaster and gelato maker.

Overhead cabinet doors would be lined on the inside with cork and chalkboard so that messages could be placed there yet keep the clutter out of site.

The sink will be deep and wide and have a tall overhead faucet allowing plenty of space to fill deep pots easily. The tap will have a mechanism to switch to filtered water and another to switch to instantly boiled water. No need to wait for the kettle to boil for a cup of tea!

Underneath the sink will be two large drawers for cleaning products, etc. so that they can be organised easily and nothing can fall out. 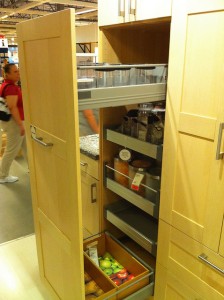 Roll out pantry by Rob Cameron

The pantry will be a vertical, thin pull out series of shelves so that dry goods can no longer lurk in dark hidden corners in the depths of the cupboard only to be found months after its expiration date.

A smaller version of the thin roll out pantry shelves would be placed next to the hobb/stove to keep flavourings, sauces and oils at hand while cooking.

While my ideal kitchen is unlikely to evoke memories of grandma’s kitchen, it must be remembered that grandma’s kitchen did not look anything like her own grandmother’s kitchen. Modern day conveniences we now take for granted such as the dishwasher, coffee maker, microwave and bread machines were considered a novel luxury at one time. I can guarantee no one pines for the days before the dishwasher was invented. The beauty of some of the new cooking equipment is that it is more precise and intelligent. Meat can be cooked perfectly every time, pizzas are as good as a restaurant and sauces never curdle. Sound like a dream? It may be your near future.

Thanks for visiting Living a Life in Colour again, good to have you back here. If you haven't yet, you might want to subscribe by e-mail . Enjoy! Thanks for visiting!
« The worst place in the world for a glutton to live
My favourite crowd-pleasing mid-week meal »