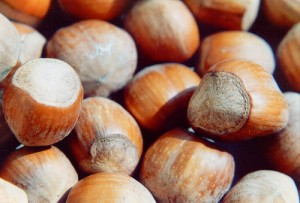 The hazelnut is rich in protein and adds texture to a dish. Hazelnuts can be brick-red or brown and can be elongated or round. Generally the elongated varieties are not as prized as the round ones. Although one of the most prized hazelnut varieties in Italy is the San Giovanni which is elongated. Other prized varieties are the round Tonda gentile delle Langhe and the Romana gentile. They are harvested at the end of the summer.

Buy: The best hazelnuts in Italy, Tonda gentile delle Langhe, come from Piedmont. Hazelnuts are sold in their shells or shelled, salted or unsalted, and roasted or raw. I prefer to buy shelled, raw, unsalted nuts as once they are roasted, they do not last as long and I can roast them freshly before cooking them. Hazelnut oil is also sold.

Store: Hazelnuts are best stored in the refrigerator or the freezer, wrapped in a sealed container. The cold will slow the oils in the nuts from going rancid. If the nuts have gone rancid, they will smell off and have a stale taste.

Prepare: Hazelnuts are normally lightly toasted and skinned before eating or cooking. Place the nuts in a frying pan over low heat and shake the pan until the nuts are evenly toasted, the skins start to crack, and smell nutty, 10-15 minutes. Be careful not to scorch the nuts. They can also be placed in a single layer on a baking tray and placed in a 150˚C oven for 15-20 minutes.  Place the nuts in a towel and rub them in the towel to remove the skins. Any hazelnuts which do not easily shed their skins can be toasted a few minutes more and repeat. They can then be cooled and used whole, chopped, or ground finely. 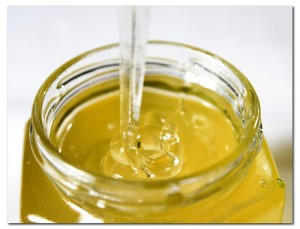 Substitutions: sugar, although honey is much sweeter, has flavour, and you need to reduce the amount of liquid or fat in the recipe by 20% of the weight of the honey (i.e. if you use 100 grams of honey, remove 20 grams of milk or butter)

Honey has been a sweetener since ancient times and is prized for its medicinal qualities. Honey’s composition is similar to inverted sugars as it has about 40% fructose, 35% glucose, maltose, and other carbohydrates.

Buy: Honey ranges in colour from almost clear to dark brown. It can be firm or runny. It should have a clean flavour without any hint of bitterness or acidity. The flowers that the bees visit will determine the colour, composition, density, scent, and the flavour of the honey (see Types below). Fine honey often is labelled with the year of production, the botanic origin or type, and the region it originated. Honey can be treated with heat to keep it from crystallising and remain clear and runny. It can also be granulated or creamed to make it smooth and fine-grained. Honey can also be sold in its honeycomb with the honey still sealed in the wax cells.

Acacia (Acacia) honey is amber in colour with a delicate flavour. It does not crystallise. It is good for making drinks, cooking with, or eating as is. The best is from Veneto.

Almond (Mandorle) honey is clear and has an intense flavour.

Arbutus (Corbezzolo) is a light green colour with a bitter flavour. It is common in Sicilia and Sardegna.

Blended (Millefiori) honey is not as fine but is more consistent in flavour. It is the most common type of honey sold. It is amber in colour and the flavour and aroma are intense.

Chestnut (Castagno) honey is dark in colour with a strong, bitter flavour with woody notes. It is less sweet than other honeys and pairs well with cheese. It is produced all over Italy and is one of the most common honeys.

Clover (Trifoglio) honey is white with a delicate taste and perfume. It is not very prized due to its high water content. It is the best for a general eating and cooking honey.

Cornflower (Fiordaliso) honey is dark green in colour with a particular, spicy flavour.

Dandelion (Tarassaco) honey is a clear golden colour with a distinctive flavour. It is spread on biscuits or bread. It is common in northeastern Italy.

Eucalyptus (Eucalipto) honey is amber in colour with a particular flavour. It is good for drinks and in cooking. It is produced in south-central Italy.

French honeysuckle (Sulla) honey is white in colour, without any scent, and is produced in south-central Italy in the spring.

Heather (Erica) honey is amber in colour with orange-red tones. It has a delicate flavour, which suits tea infusions.

Lavender (Lavanda) honey is amber in colour, highly aromatic, and has a delicate flavour of lavender. It crystallises easily. It is considered one of the best honeys. The best quality is produced in Liguria.

Lemon flower (Zagara di limone) honey is clear in colour and has a delicate flavour with a lemon scent. The most highly prized honey comes from Sicilia.

Lime flower (Tiglio) honey is a light yellow colour with an intense perfume and distinct flavour. It is used to sweeten tea infusions. It is common in northeastern Italy and Toscana.

Oregano (Origano) honey is amber in colour with an intense aroma. It is rather rare as it is produced exclusively in the mountains of Piemonte.

Orange blossom (Zagara d’arancia) honey is clear in colour and has an intense flavour of orange blossom. The most highly prized honey comes from Calabria and Sicilia.

Pittosporum (Pitosforo) honey is red-brown in colour and has an intense flavour and aroma.

Rapeflower (Colza) honey is white in colour, has a particular flavour, and is quite rare. It is produced in north-central Italy. Many people do not like it.

Rhododendron (Rododendro) honey is white and intensely perfumed. It is one of the most prized honeys. It is produced in the Alps.

Rosemary (Rosmarino) honey is white in colour and delicately perfumed. It is common in southern Italy.

Spruce (Abete) honey is dark green in colour with a pleasant pine taste.

Sunflower (Girasole) honey is clear and has a delicate flavour.

Thyme (Timo) honey is clear with an intense perfume and distinct flavour.  It is common in southern Italy. Thyme honey from Trapani is highly prized.

“Miele centrifugato” has been heated at a low temperature and filtered to ensure its quality and shelf life.

“Miele colato” the honey is obtained by draining the honeycomb without heating or a minimal amount of heating.

“Miele torchiato” the honey is obtained by applying pressure to the honeycomb and does not use heat or a minimal amount of heat.

“Vergine integrale” means the honey is pure and has not undergone any form of treatment.

Prepare: If the honey has crystallised, place the open jar in 70˚C water up to the level of the honey until the crystals melt.  Honey should not be heated above 180˚C or it will become very dark.

Eat: Honey is used in confectionary, biscuits (biscotti integrali, biscotti alle spezie, cavallucci, cuddureddi, and piparelli), desserts (dolce al miele, dolcetti al cioccolato, semifreddo al miele, panforte, spongata, struffoli, and nucatoli), gelato, drinks, and as medicine. In Sicilia some sweets are made with honey instead of sugar and are used to top fritters (sfinci ammilati and crispelle di riso). Honey is used in making gelato as it reduces the temperature at which gelato solidifies so the texture of the gelato is softer. It is eaten as is on bread, biscuits, or with cheese. It is also used in savoury dishes, particularly sweet and sour recipes (cipolline in agrodolce al miele), to glaze meat (cosciotto di maiale glassato al miele), and sauces (salsa di avije).