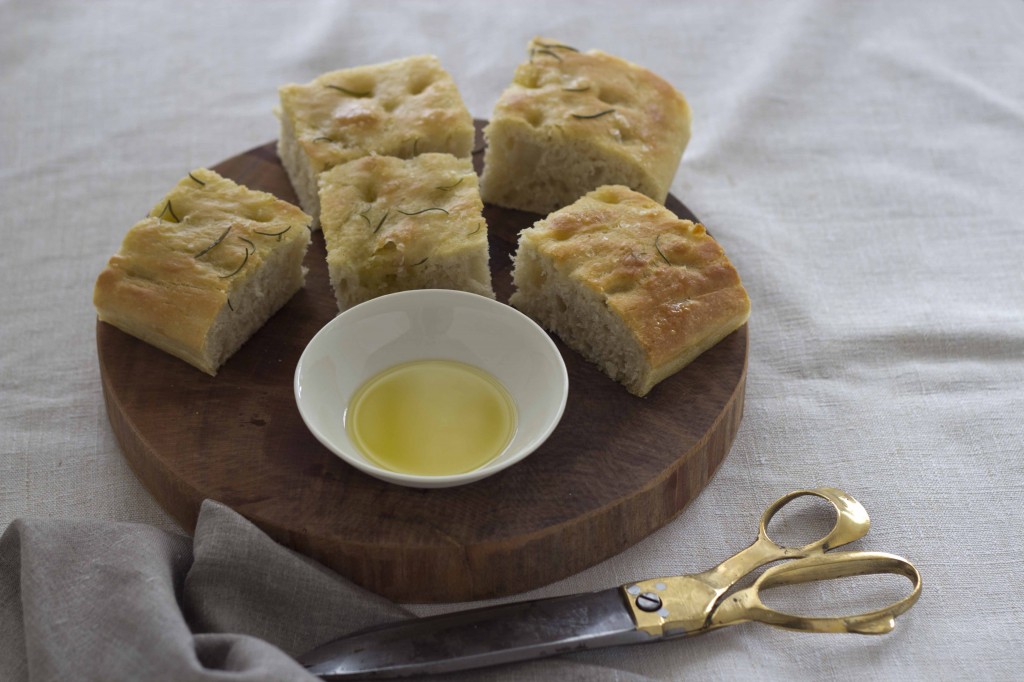 I admit, I have been obsessing for years over perfecting my focaccia recipe. This is partially due to nostalgia for long days at the beach in Liguria and partially due to my 5 year old son’s love for all things Ligurian (which I view as a cosmic link to his Ligurian godmother).

I was pretty happy with my recipe up until a passing comment made in a focacceria in Italy a few months ago. I thought the key to perfect focaccia was the biga (a type of bread mother made with flour, water and yeast which is allowed to ferment at least overnight but preferably over a longer period of time, being fed every few days) and getting the water and steam combination down. The biga creates a softer dough with a greater depth of flavour and the bread lasts longer. Having a relatively high water content, brushing the dough heavily with water while it is proofing and creating steam in the oven all help to make the dough soft and fluffy. But still there was a lingering feeling in my head that there was something missing. I was happy with my ratio of strong bread flour to more the more refined 00 flour but something about the texture wasn’t the same.

Then I entered a focacceria to buy some focaccia for my sons and the man behind the counter asked if I wanted the focaccia stuffed with stracchino cheese or the one made with potato flakes (fiocchi di patate not fecola di patate used in cakes). I thought about this and started questioning him further. Then I started researching and then I went home and started testing.

I ordered a package of Smash (instant dried mashed potato) which immediately drew the curiosity of anyone who entered my home. Apparently I don’t appear to be a Smash connoisseur….I always called them “buds in a box”.  Part of me resented being stereotyped.  Growing up with everything from sausage to sauces and jams being homemade, industrial products like Smash have always had a mystical allure to them, akin to space food.

In any case, it turns out replacing the soft flour with 10 to 14% of the overall flour in the recipe with Smash yields the most perfectly fluffy focaccia one could hope for. In Italy it is called potato flakes (fiocchi di patate) which sounds more sophisticated (and probably is) but Smash works a treat. Now I have shared my dirty little secret, I encourage you to try it for yourself. Feel free to disclose the secret or not.

For the step-by-step illustrated version of the recipe, click here. 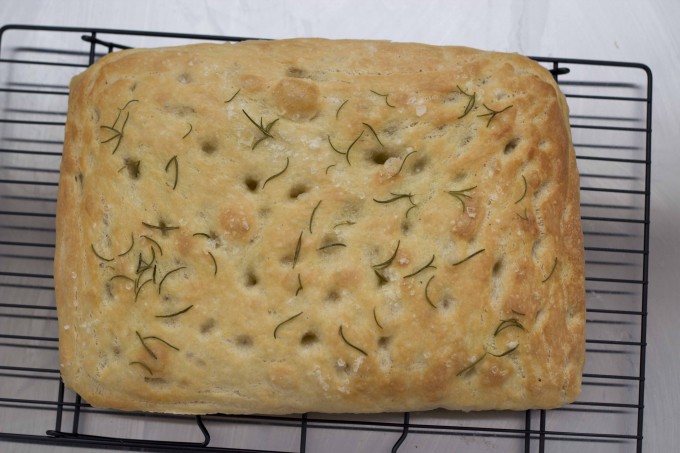 The night before (or even a few days before) you want to make focaccia, make the biga and place in a sealed container in the refrigerator.

In a measuring cup, mix warm water (ideally 37˚C) with the yeast and let it sit for 10 minutes.

Mix both of the flours, instant mashed potatoes and the salt. Add the biga, warm water with yeast, 30 mls of olive oil, and 210 mls of cold water.

Knead by hand or in a standing mixer with the dough hook attachment for 12 minutes on low speed.

If you are using a standing mixer then mix until the dough no longer sticks to the bowl while the machine is on.

The dough is ready when you can spread it between your fingers to form a thin “window” and it does not break.

Using a dough scraper (the dough will be very soft and sticky) to fold one side of the dough over the other, turn the bowl 90 degrees and repeat. Keep repeating until all four sides have been folded over.

Pour over 30 mls of olive oil over the dough and flip the dough over in the bowl.

Cover the top with cling film or a damp tea towel and leave the dough to double in size in a warm place for 1 hour. You want a slow rise so make sure the dough is not left in a hot location.

When it has doubled in size, punch it down.

Flip the dough over again. Let it rise again for 1 hour.

The dough is ready when it has doubled in size.

Press the dough into the paper-lined sheet pan with your fingers.

Invert another pan on top and cover with a damp tea towel. Let double in size.

Place a cake tin full of water in the bottom of the oven. In the middle of the oven place either a baking stone or an upside down sheet pan. Heat the oven to 180 C.

Use your fingers to press dimples into the focaccia dough, brush generously with 60 ml of olive oil.

Remove the focaccia from the oven and immediately remove from pan and paper and place on a wire rack to cool. Brush again with remaining 80 mls of olive oil. Let cool before cutting with a serrated knife or scissors.