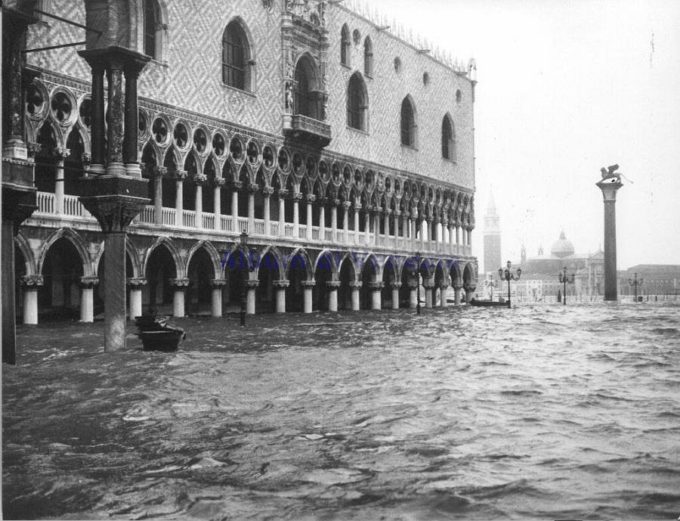 Venice flooding in 1966 by By Unknown

Anyone who saw the recent footage of the Veneto seemingly sinking into the sea would have wanted to weep but fortunately the tides seem to have recessed this month. Venice is no stranger to flooding having been constructed over 118 islands with the water managed with engineering since the 12th century but this year’s flooding has covered 70% of the city with levels up to 156 cm. Even the longest pair of rain boots won’t address that problem. While the rest of us watched the devastation on television, the inhabitants of the Venice could only comfort themselves with friends, family and food.  While thinking of the Veneto these past few weeks, I of course came to be thinking of Venetian food and one of our favourite dishes, baccalà mantecato (whipped dried cod),which will be part of our array of dishes for Christmas lunch. 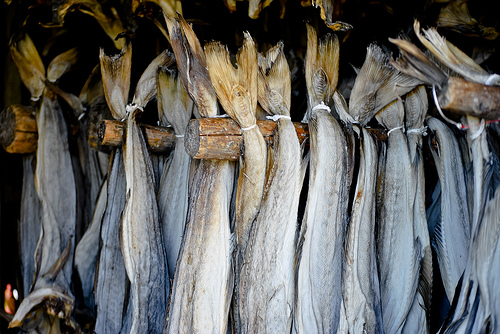 It has been to my utter disappointment that until now I have not been able to share a perfect recipe for baccalà mantecato. Part of the reason for this is that in the Veneto, the words for baccalà and stoccofisso have the exact opposite meanings as elsewhere in Italy. Baccalà in Veneto is dried cod whereas elsewhere in Italy, it is salt cod. Stoccofisso in Veneto means salt cod whereas in the rest of Italy it means dried cod. To add to the confusion, many of the abounding recipes for baccalà mantecato use salt cod and deliver a flavour unlike the one I so love when in Venice. (Side note: to further add to the confusion, there is a baccalà mantecato from Ferrara which does use salt cod cooked in milk but it is not whipped.) 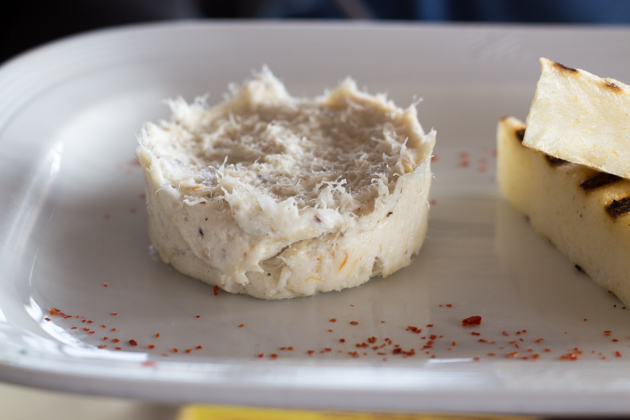 Furthermore the texture has not been that easy to replicate until I began to understand that in many ways that making baccalà mantecato is like making a sauce, a mayonnaise to be exact, except without the egg. It apparently used to be made in a butter churn (zangola) which makes a lot of sense. 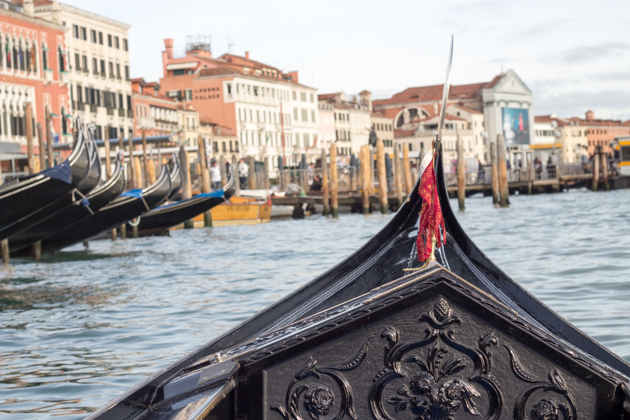 I know if you make it, you will enjoy it. It is perfect on toasted bread or grilled polenta. Do not be put off by the long preparation time, it is essentially soaking the fish and changing the water which takes a few seconds at a time. It is well worth the time and keeps for a while in the fridge. If you are having friends over for drinks, it is the perfect, elegant, antipasto served on small rounds of toasted bread (or polenta for gluten-free friends).

If you like, you can add a garlic clove and half a lemon to the poaching water. For illustrated step-by-step instructions, click here. 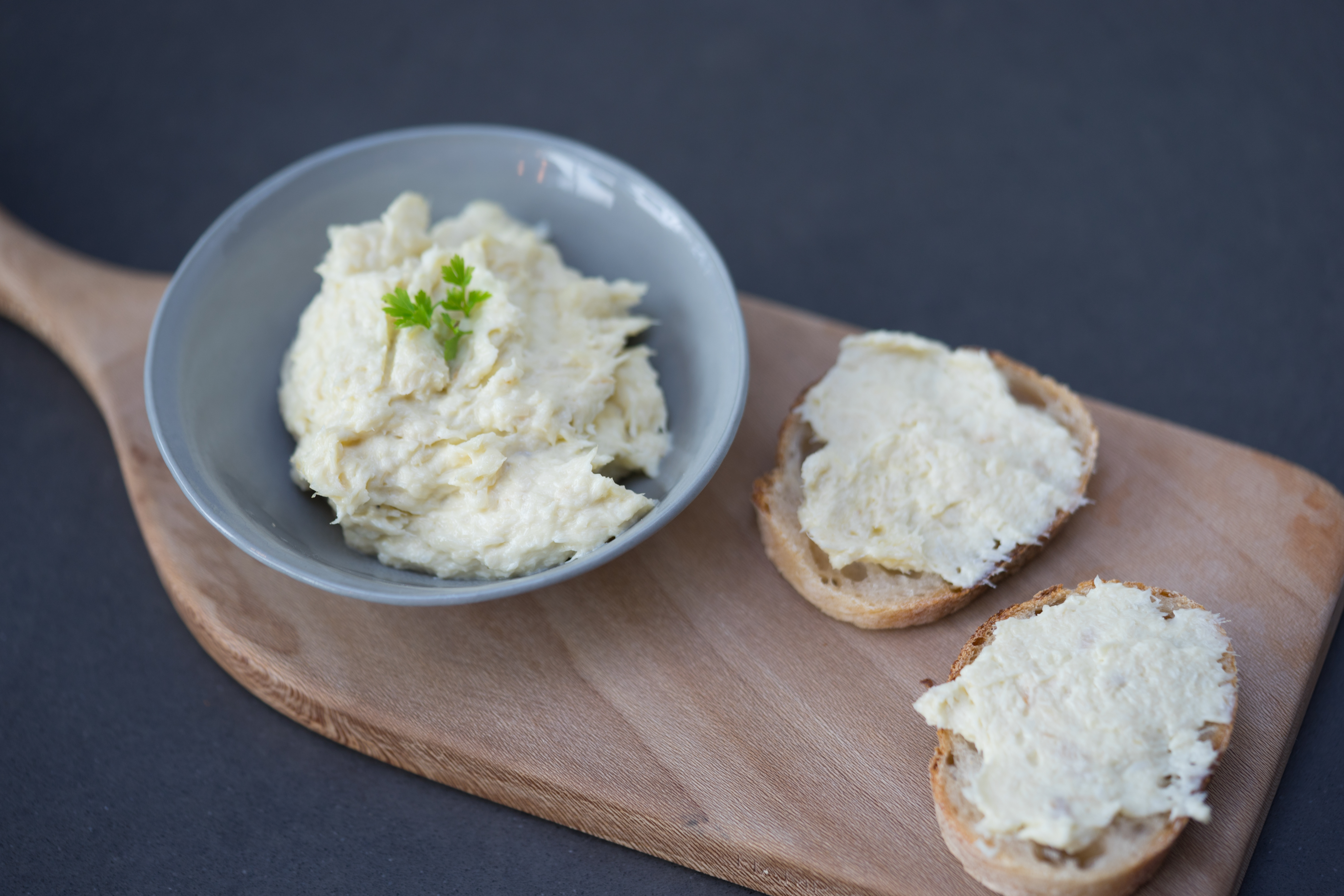 Soak the stockfish in enough water to cover for 3 days, changing the water as frequently as every 2 hours or as much as possible, keeping it in the fridge. I often only remember twice a day and it is fine.
Drain the water, remove the skin from the fish and put into a pot with 10 grams of salt for every litre of water and enough water to cover the fish. Add the bay leaves (and garlic and lemon if using). Bring the water to a boil and cook for 10 minutes.
Reserve 1 cup of the cooking water. Use a slotted spoon to remove the fish and remove the bones carefully before adding to the bowl of a standing mixer.
Heat the sunflower and olive oils together to 60C.
Add the paddle to the standing mixer and begin to mix the fish on low speed. Begin adding the oils, a little at a time, ensuring that the previous amount was absorbed before adding more. Continue like this for 20 minutes until all the oil has been added and the fish is firmly mashed.
Remove the fish and add to a food processor with the normal blade attachment. Taste and begin adding the reserved cooking water as needed (about 75 to 100 mls). Puree the mixture until there are no chunks and it has emulsified. Add salt to taste and puree until well dispersed.
Enjoy!

Thanks for visiting Living a Life in Colour again, good to have you back here. If you haven't yet, you might want to subscribe by e-mail . Enjoy! Thanks for visiting!
« Hazelnut cake- 3 ingredients combined to make an irresistible cake