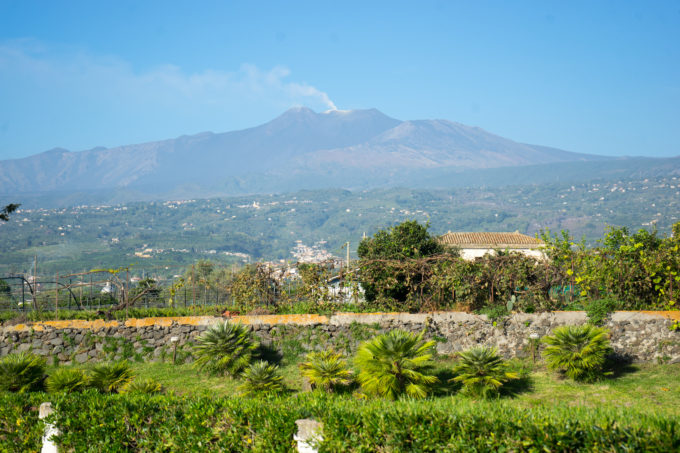 Mount Etna, a live volcano just outside of Catania

I apologise for the stereo silence for the past two weeks. I was really unlucky and had a shocking and unprecedented lack of wi-fi during my trip to Sicily and Calabria. That said, I had a really relaxing time probably because of it. I have loads of interesting dishes and sights to share with you as soon as I process the photos. One of our favourite visits during the trip was to the Marchesi di San Giuliano, an organic citrus estate owned by the family of the Marquis of San Giuliano (which is also part of the Ferragamo family) for over 800 years.  (They have only been growing citrus there for the past 200 years though.) They are famous for their citrus marmalades, honey and biscuits using family recipes. I have had a bit of citrus obsession recently which led me to researching the health effects of blood oranges with the help of a botanist friend. We were visiting Mount Etna and many of Sicily’s blood oranges grow on the Plain of Catania, to the west of Mount Etna, so we definitely had to visit. 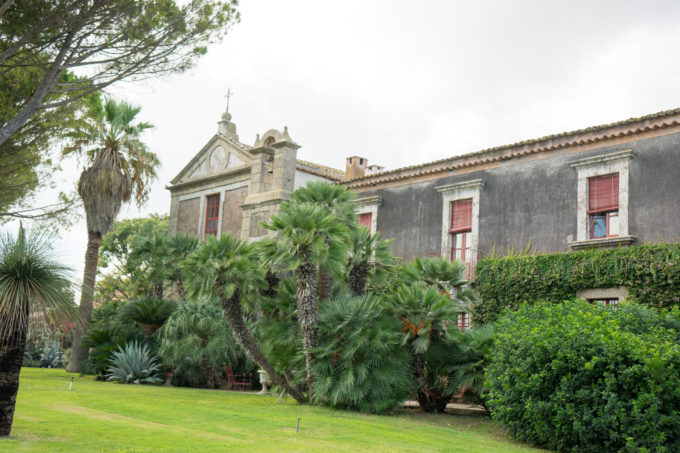 The family church on the Marchesi di San Giuliano estate 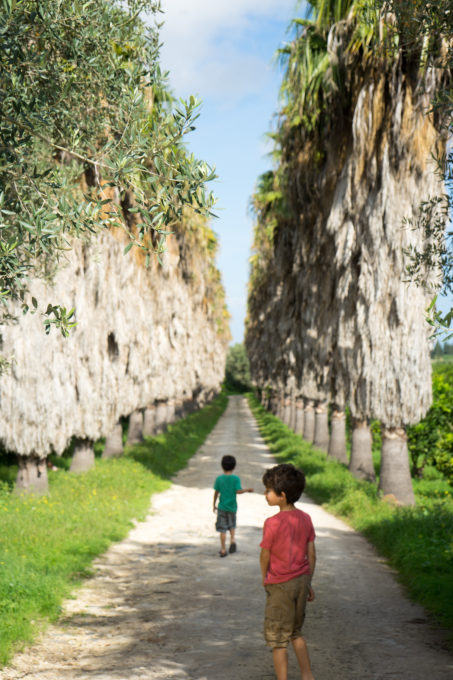 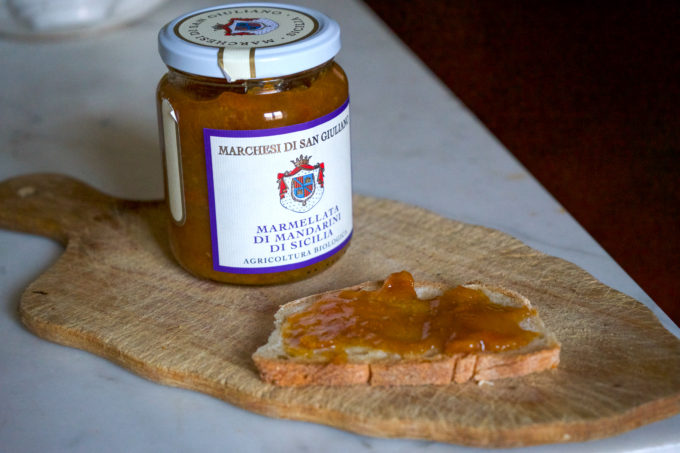 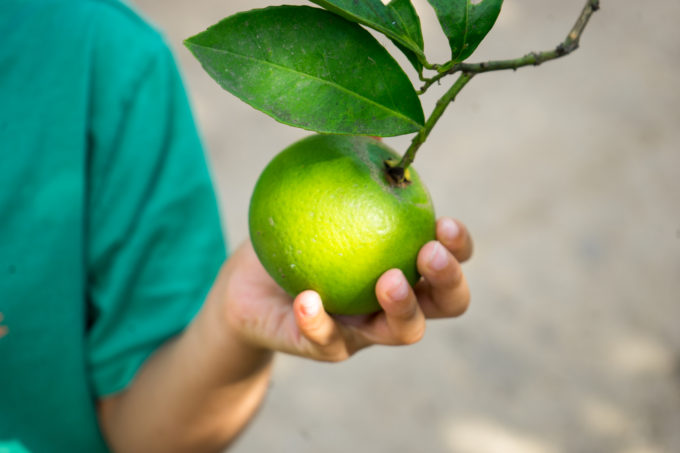 After buying a hospital-grade air purifier in Hong Kong, limiting my son’s exposure to pollution as much as possible and removing all soft furnishings from our home, I wondered what role nutrition played in modifying the effect of pollution. Through my love of Italian food, I discovered that Sicilian blood oranges were attributed with minimizing the detrimental effects of air pollution. A study was done on traffic police officers in Palermo, where half the officers were given an extract from blood oranges and the other half were given a placebo. Except for the officers who habitually smoked cigarettes, the officers given the blood orange extract had notably reduced evidence of oxidative compared to the officers that took the placebo[7]. As an added bonus, other studies have shown that consumption of Sicilian blood oranges has prevented obesity in mice fed a high-fat diet[8]. 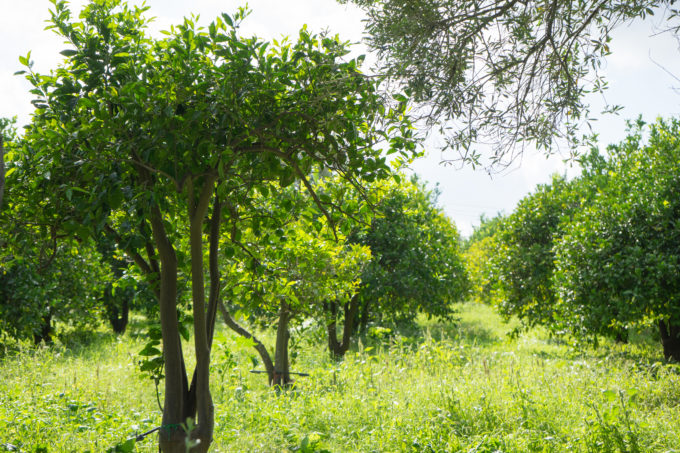 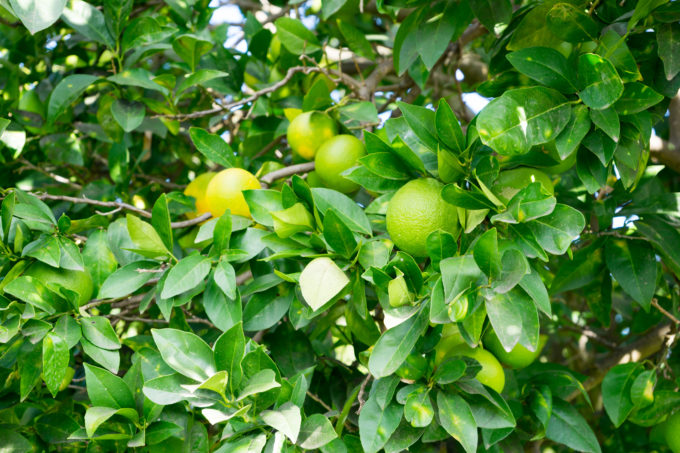 Oranges are actually a hybrid of the pomelo and the mandarin. I must emphasize that the blood oranges need be Sicilian because blood oranges are grown in Spain, Australia, Japan, South Africa, Pakistan, Israel, California, Iran and China (jingxian oranges) but only the Sicilian blood oranges obtain the highest levels of anthocyanin which is attributed with high antioxidant activity[9]. They also contain other antioxidants such as Vitamin C and carotenoids, which work in symphony. Researchers believe these antioxidants protect the DNA from air pollution by preventing free radicals from causing damage[10]. The Jingxian oranges from China are smaller in size and have a higher seed content than their Sicilian counterparts and are the only other blood oranges outside of Sicily with even a fraction of the anthocyanins[11]. 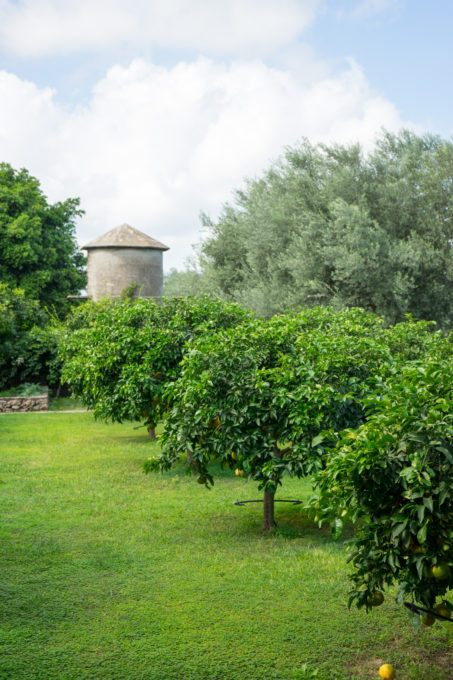 Orange and olive trees on the estate 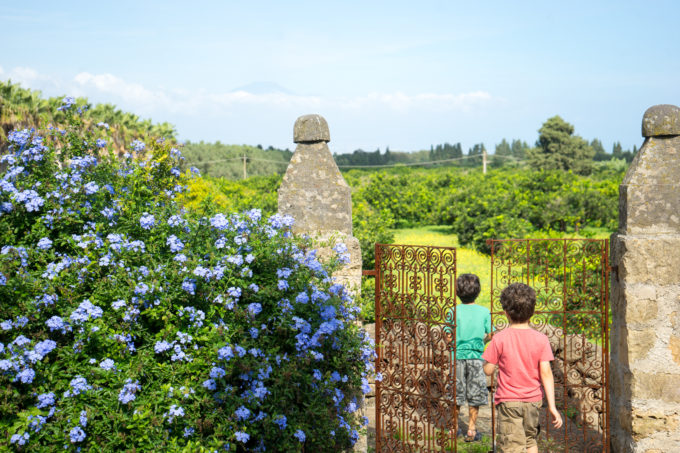 Exploring the gardens, one of the Grandi Giardini Italiani (an association of amazing gardens in Italy)

The reason why Sicilian blood oranges (Moro, Tarocco and Sanguinello varieties in order of quantity of anthocyanins) have higher levels of anthocyanins (which cause the blood colour in the fruit) is due to the extreme temperatures they are grown in, which fluctuate from very hot during the day to very cold at night. This rapid temperature change brings out bright red colours and the anthocyanins in the fruit. This is the reason why it has been difficult to commercially grow blood oranges in other locations. It is simply too expensive to artificially mimic the Sicilian climatic conditions[12]. 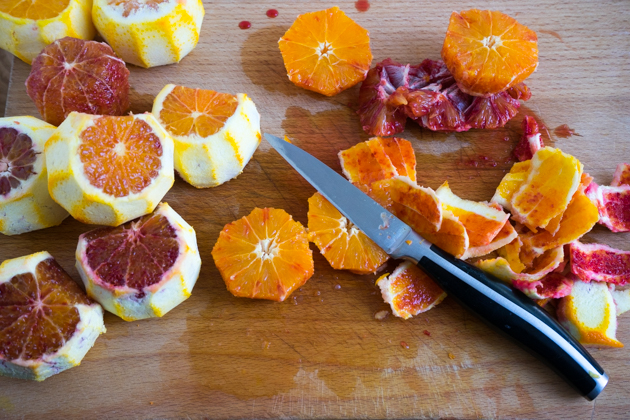 While anthocyanins are present in all red, purple and blue fruit (think berries), they are more highly concentrated in Sicilian blood oranges. While anthocyanins are clearly very good for you, what is not known is if they are good on their own or if their effect is more complex; if they work best together with other vitamins and minerals. 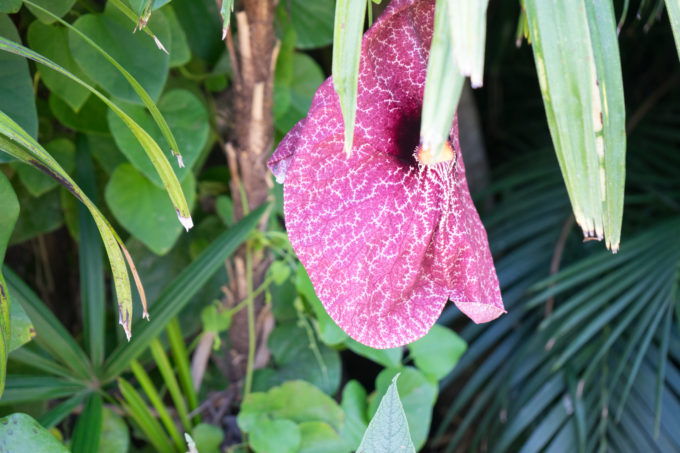 Extraordinary flowers in the gardens 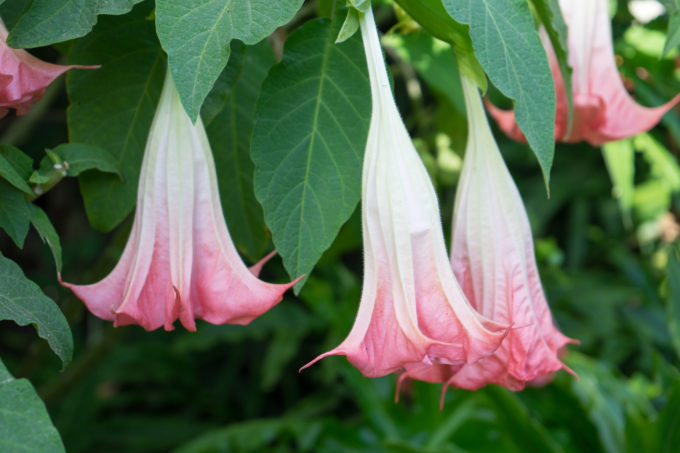 These beautiful flowers dot the countryside near Catania

My brother is a doctor and is often cynical about single studies as it is notoriously difficult to control for other factors such as environment, socioeconomic factors, life stage, body mass index, previous nutrition, genetics and combining factors. There have however been multiple studies that support the idea that antioxidants are beneficial in combatting the effects of air pollution[13]. Furthermore, studies have been conducted which indicate that low intake of antioxidants is associated with asthma and that people with a low intake of antioxidants are more than twice as likely to be asthmatic[14]. This makes sense considering that the fluid in the lining of the lungs contains a broad spectrum of antioxidants, particularly vitamin C[15]. Eating food rich in antioxidants has been shown to have a protective effect against asthma and allergy as well as cancer[16]. Other studies have shown a benefit from eating antioxidant rich foods in pregnancy. One study showed that pregnant women following the Mediterranean diet, which is rich in fruits and vegetables, reduced the risk for persistent wheeze in children by 78%[17]. Some scientists believe that the origin of asthma and allergy is in fetal life or early childhood. 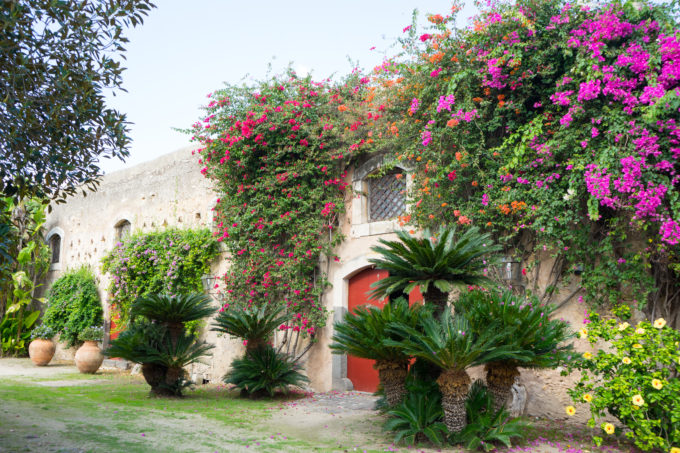 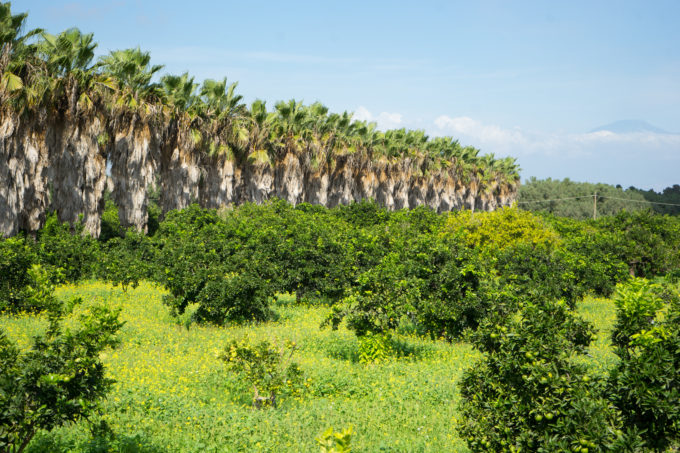 Sadly, the Sicilian blood orange season is relatively short and its production geographically limited. The juice can be preserved for long shelf life and drinking it has been shown to be beneficial[18]. The greatest benefit however is derived from eating the fruit as it is more slowly absorbed by the body and travels further through the digestive system. 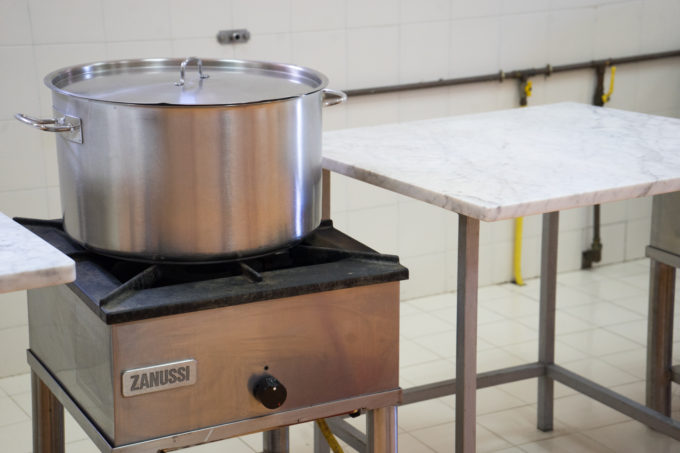 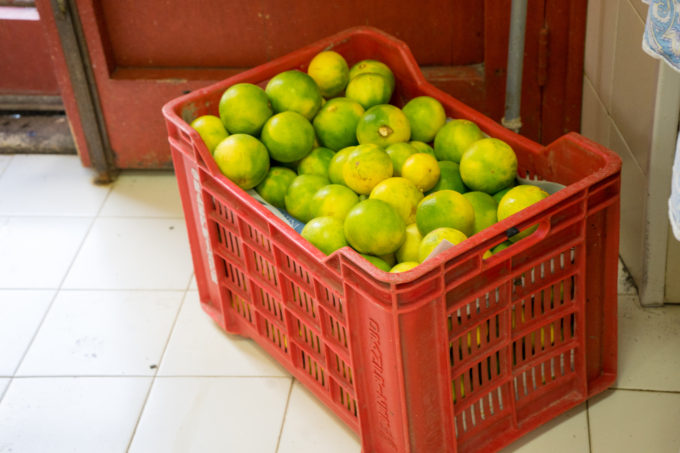 Crates of oranges to make marmalade

Historically, citrus fruit was preserved by candying it or soaking it in seawater to combat scurvy in sailors at sea (think of Cambodian or Moroccan lemons preserved in salt which are still eaten today). I like to make blood orange marmalade as it uses the entire fruit (the peel is rich in carotenoids and anthocyanins) and is an excellent traditional way to preserve the fruit to enjoy year-round. Also, marmalade is more palatable to my 4-year old and easier to get him to eat every day, albeit not low in sugar. 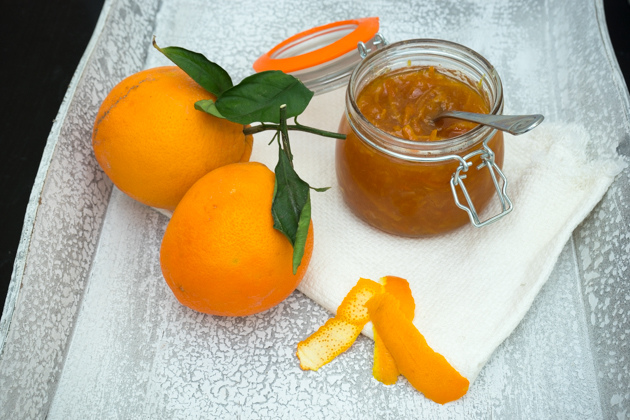 Italian marmalade contains less sugar than it’s British counterpart. Traditional Italian recipes will call for whole oranges to be soaked in water for several days and then ground but this recipe speeds up the process while containing all the goodness. For a recipe with illustrated step-by-step instructions, click here.

Remove the zest of the orange with a paring knife and cut into thin strips. Place in a saucepan and cover with water. Bring the water to boil for 5 minutes. Use a paring knife to remove the white pith. Cut the oranges in half and remove the seeds. Discard the pith and seeds. Weigh the oranges. The amount of sugar added will be equal to that of the oranges (approximately 680 grams depending on the thickness of the pith). Chop the oranges and mix with the lemon juice and sugar in a separate saucepan. Bring to a boil and reduce to a simmer. Use a thermometer to check when the temperature gets to 105C, about 1 hour of cooking. Be careful not to overcook the fruit or the marmalade will be too dark. Check that the marmalade is done by placing a plate into the freezer for 10 minutes. Add a small amount of the marmalade to the plate and place in the refrigerator for 2 minutes. Draw your finger through the marmalade and see if it gels and stays separate. If so, it is ready. If not, keep cooking and try again after 10 minutes. When the marmalade is nearly cooked, add the drained zest to the oranges and cook for the last 3 minutes. When the marmalade is finished, pour into sterilized pots and seal.

Happy Halloween to everyone for yesterday. Here are some scary biscuits (cookies) I found in Italy. 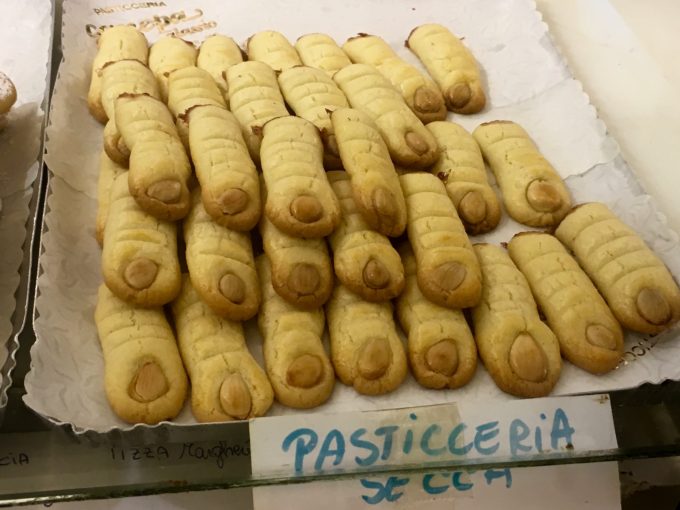 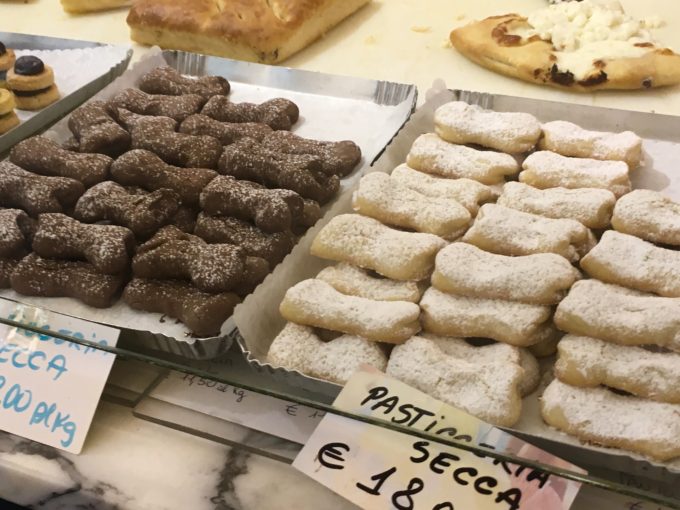 “Bones of the dead” biscuits

For more information on the Marchesi di San Giuliano or where to purchase their products, they can be found at:

[5] Moreno-Macias et al, “Effects of Antioxidant Supplements and Nutrients on Patients with Asthma and Allergies”.

[10] Moreno-Macias et al. “Effects of Antioxidant Supplements and Nutrients on Patients with Asthma and Allergies”.

Moreno-Macias, H. and Romieu, I. “Effects of Antioxidant Supplements and Nutrients on Patients with Asthma and Allergies”

[14] Moreno-Macias et al. “Effects of Antioxidant Supplements and Nutrients on Patients with Asthma and Allergies”.

[17] Moreno-Macias, “Effects of Antioxidant Supplements and Nutrients on Patients with Asthma and Allergies”.

Thanks for visiting Living a Life in Colour again, good to have you back here. If you haven't yet, you might want to subscribe by e-mail . Enjoy! Thanks for visiting!
« Crab risotto: The perfect healthy, quick mid-week meal
Solidarity with Norcia, the latest earthquake victim »