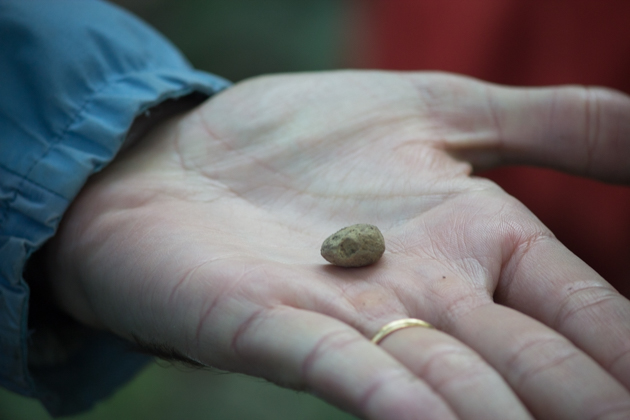 My husband and I were discussing hypothetically spending a year living in different parts of Italy. The natural question was, which regions were best at which points of the year? The early summer we decided was best for the beaches of the Amalfi coast in Campagna, Sardegna and Sicily. The late summer we would prefer to avoid the crowds and high heat in the mountains like Merano in Alto Adige and Gran Paradiso in Valle d’Aosta or the lakes such as Lago Maggiore and Lago di Como. When we arrived at September, there was a disagreement between the beaches of Liguria (me) and the wine harvesting areas such as the Langhe in Piemonte and Tuscany (my husband). When the conversation arrived at October and November, we were united again that it could only be Piemonte primarily due to our love of white truffles (Tuber magnatum pico), known as trifola in Piedmont. For a guide to truffles, click here. 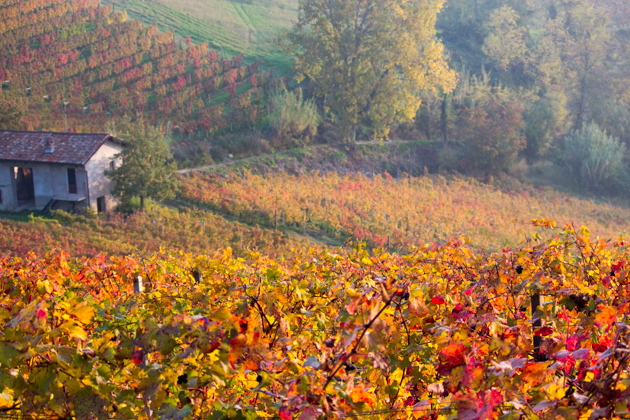 The Langhe in the autumn

Neither of us are sure why we waited until now to go truffle hunting. This year has been disastrous for truffles since the summer was very hot and there has not been much rain. As truffles are a fungus, they need moisture in order to grow. While the season runs from October to December, we were also a bit early as mid November is a better time to try. We persevered anyway, having booked this too far in advance to predict that this was not our year. We met Renato, our trifolau (truffle hunter) for the day. We had heard from friends from Alba (ground zero for white truffles) that truffle hunting was surrounded by mystery and as a child, had mystical legends associated with it. Truffle hunting was said to be shrouded in secrecy, that fathers only told their oldest son where the truffles are found and that no one told anyone if they found truffles. 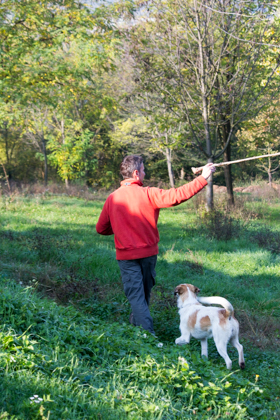 Heading off into the woods in search of truffles

Renato quickly dismissed these tales and informed us that he had purchased his truffle hunting land, as did his truffle hunting neighbours (with a fence demarking each other’s territory). While truffles have a long history as one of the most expensive foods in the world as they are remarkably rare, so far this year they have become slightly rarer. This is partially due to the increase of land used for hazelnut groves. Hazelnuts provide a more stable income than the elusive white truffle (which sadly does not grow under hazelnut trees, although the less-prized, black truffles do). The majority of the hazelnuts in the area are sold to Ferrero and end up in Baci and Nutella. 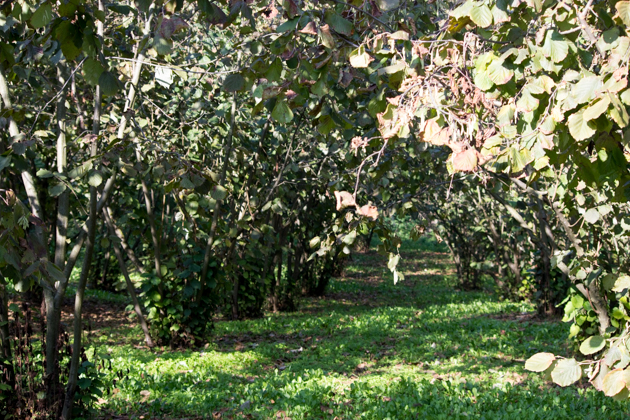 White truffles grow in symbiosis with oak, lime/linden, white poplar, elm and cedar trees. They take on different colours and flavours according to the type of tree it grows under. Oak trees are considered to provide the best environment for white truffles. 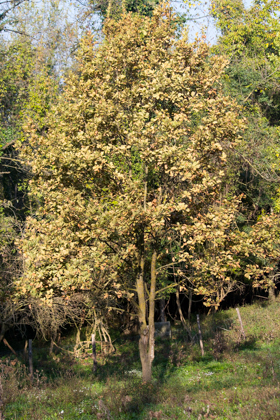 An oak tree- is there a truffle under it? 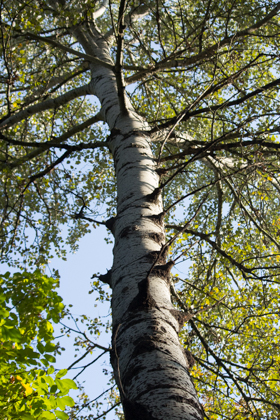 A white poplar tree- our pot of gold?

How to truffle hunt

Traditionally pigs were used to truffle hunt but while they have keen noses, it is difficult to stop the pig from eating the truffle it has found. Dogs are trained from young and are initially allowed to eat the truffles they find and are then trained not to eat the truffle once found and are given a treat instead. We took out a mother and daughter pair of dogs. While the daughter had a keener nose, she was less interested in searching for truffles. Renato explained that she is very Italian, “when it was a game, she was excellent but now that it has become work, she is no longer interested.” We were warned that we could in all likelihood find nothing. “Some trifolau hide truffles beforehand as they don’t like to disappoint people, but I prefer to show the reality of the situation. If you don’t find a truffle, I’ll give you some cheese I made,” explained Renato. 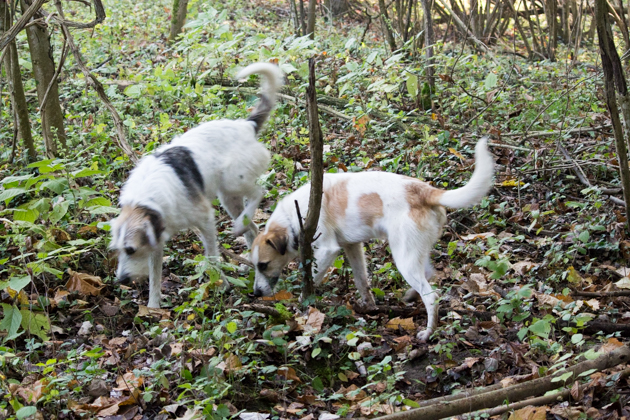 The truffle dogs, hard at work

The dogs sniffed around and would take extra care to go back over ground where they had previously found truffles, typically where there were a cluster of oak and white poplar trees. They stop and start digging when they catch the scent of a truffle and then Renato would start digging himself. If he could not find anything, he would bring the dog back to pinpoint where it was or indicate that it was a false alarm. This happened once. We covered the roots of the tree so they would not dry out and die. 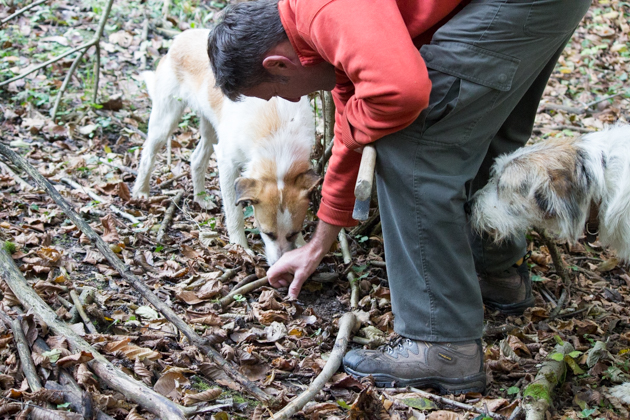 The second time, we thought the same had happened again, until we happened upon the world’s smallest truffle. Every year there are headlines around the world announcing the largest truffle sold. Something tells me there is not even a booby prize for the world’s smallest truffle. Renato explained that truffles only had a strong scent when they were ready to be eaten, regardless of their size. Our truffle would not continue to grow even if we put it back. Renato was a nice guy, he gave us the cheese anyway. 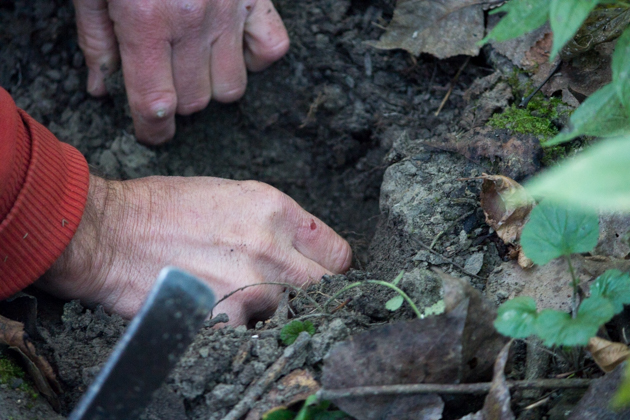 I assumed correctly that a Piedmontese cheesemaker would likely have some Bross at home, which he did! Bross / Brusso is a pungent homemade concoction of leftover bits of different types of cheese left to ripen and meld together. After 20 days, grappa is added. A tiny bit of Bross is added to risottos and soups to add a depth of flavour or eaten with toasted bread or polenta. 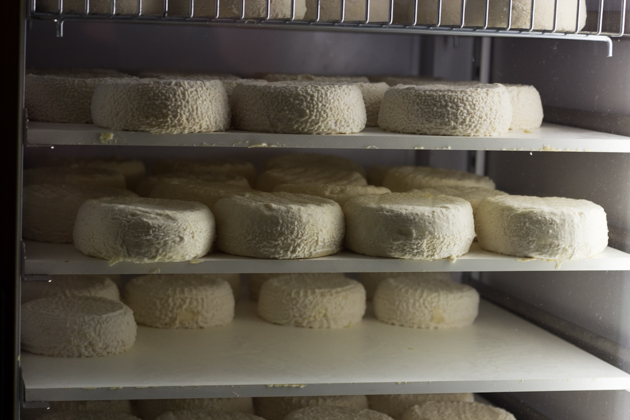 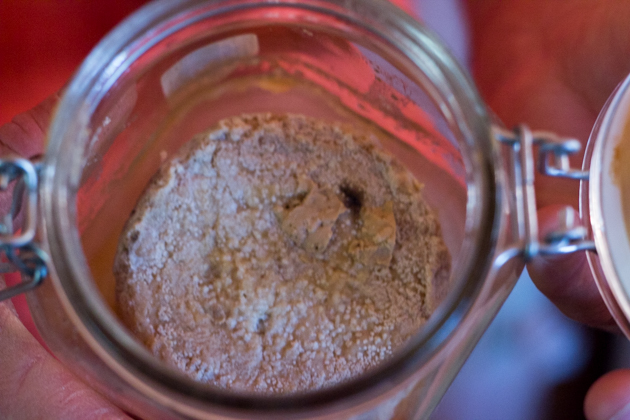 To console ourselves further, we attended the truffle fair int where truffles of all sizes were on offer. We had been warned not to buy truffles from anywhere else but inside the market as there were counterfeit inferior white truffles from Albania and the former Yugoslavian countries around.  The truffles in the market had all been verified as real truffles from around Alba. 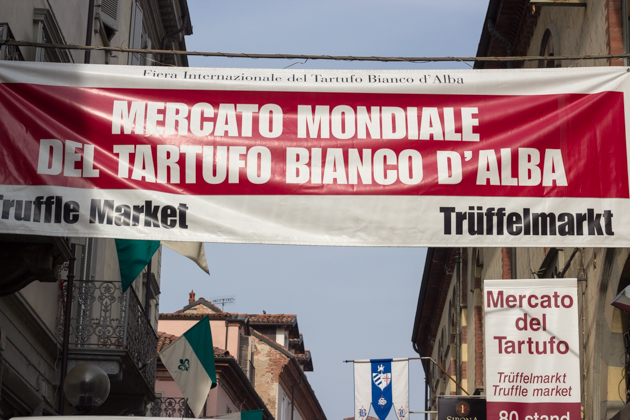 Upon entering the market, our noses were filled with the intoxicating perfume of truffle. My favourite vendor had tied truffles to his hat! Prices ranged from EUR 2,ooo to 5,000 per kilo, depending on the size (larger truffles cost more due to their relative rarity and better ratio of inside to sandy exterior), the scent (the stronger the better) and the age (the firmer the better). Be careful there is not too much soil around the truffle, as you are paying for this. The soil does help keep the truffle from drying out though. A truffle which is heavy for its size is another good indication of freshness. 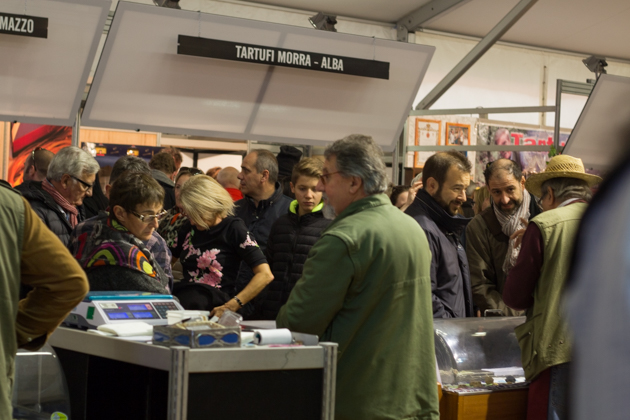 Vendors selling their truffles at the fair 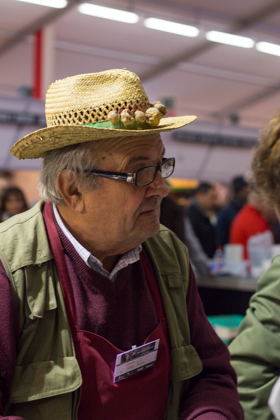 My favourite vendor with truffles tied to his hat! 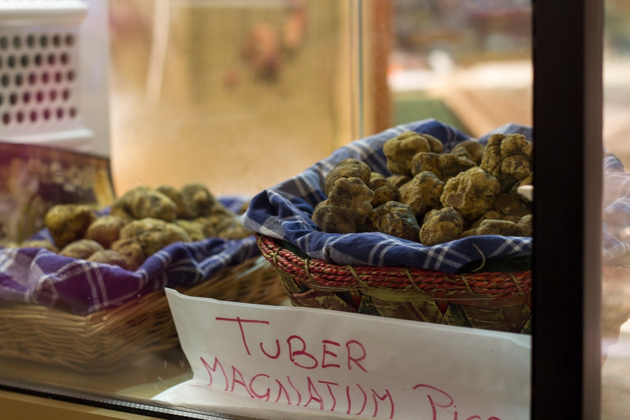 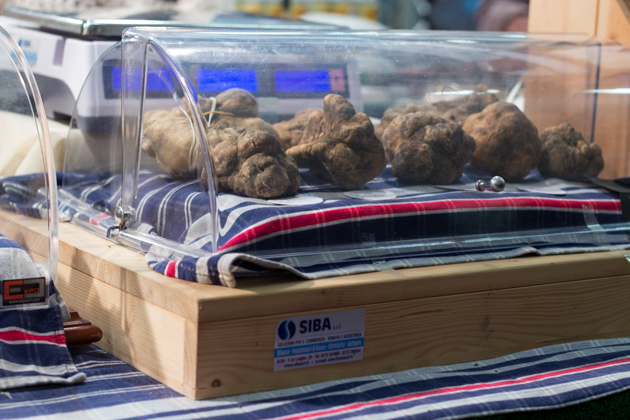 Look how huge these truffles are!

Also on offer were black summer truffles (scorzone), Tuscan black truffles (tartufo nero uncinato) and the smooth black truffle (tartufo nero liscio) which are vastly inferior (though still tasty) and this is reflected in the price as it costs 1/30th the price of white truffles. Another highlight of the fair, towards the back are booths from some of the top cheese shops, salumi makers, chocolate makers and pastry shops from around the Langhe. 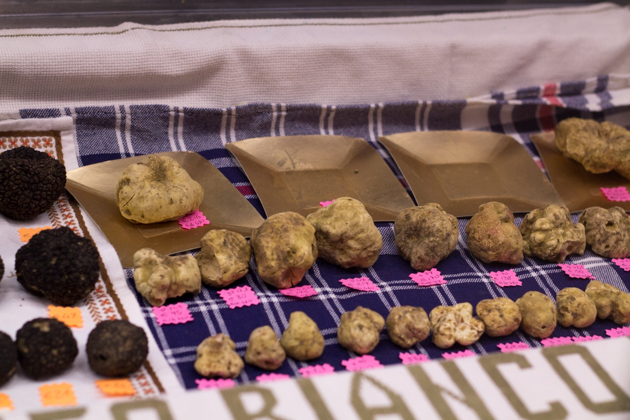 Truffles for all budgets 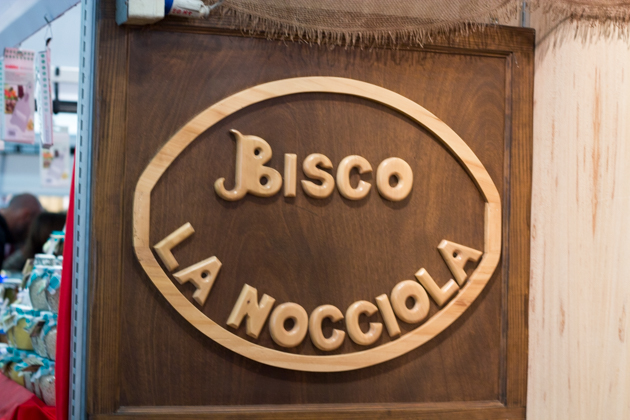 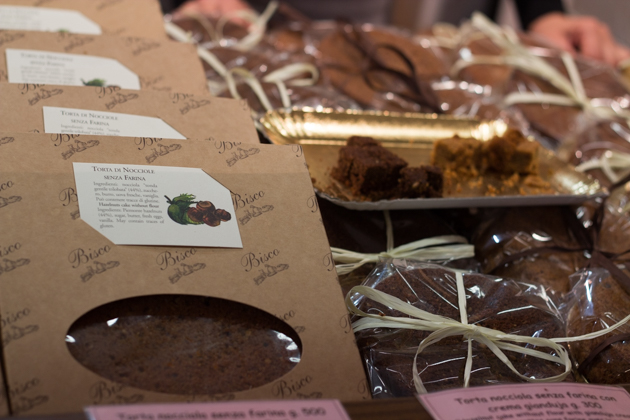 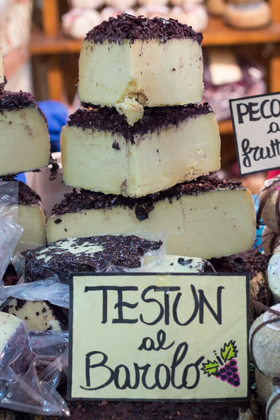 If you don’t manage to visit while the fair is on, a traditional local shop selling all sorts of truffled pastas, cheeses, salumi, etc. is Polleria Ratti. If you are looking for an excellent restaurant in which to try local food or traditional dishes featuring white truffle, look no further than La Piola, the informal sister restaurant to Piazza Duomo (voted one of the top 50 restaurants in the world).

If you go truffle hunting, please share what you found!

If you have a white truffle, here is a classic truffle recipe (see the full recipe here): 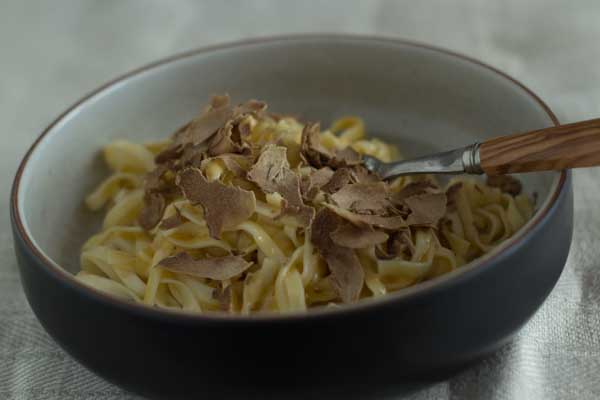 Bring a large pot of 6 litres of water to boil and add 60 grams of sea salt.

Mix the Parmigiano-Reggiano cheese with the black pepper and the nutmeg. In a sautepan over low heat, melt the butter (do not cook out the butter solids or allow the butter to change colour). The butter should just melt and not become “oily”.

Add the pasta to the boiling water.

Once the butter has melted, add the Parmigiano-Reggiano cheese mixture and a small pinch of salt, stirring with a whisk or fork to keep the mixture emulsified as the cheese melts. Once melted, stir in the chicken stock.

Remove and strain the pasta when done (either use the timing on the package or to your own desired consistency). Add the pasta to the butter sauce, tossing to coat the pasta. Divide the pasta between two bowls and shave the truffle evenly over the two bowls. Serve immediately.

The premier white truffle fair in the world where locals sell white and black truffles as well as truffle infused cheeses, pasta and salumi. Another highlight is top pastry shops, cheesemongers, chocolatiers and salumi makers selling their goods. 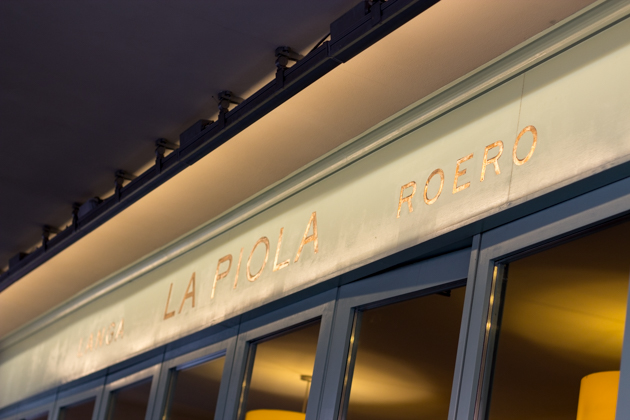 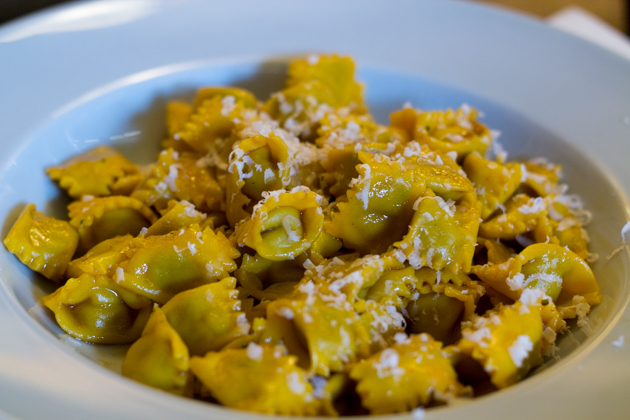 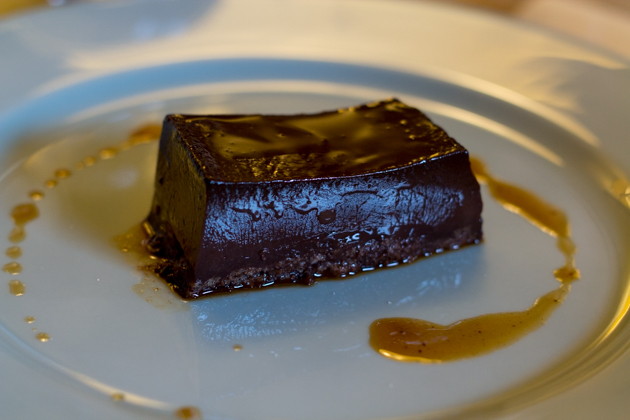 La Piola was founded by Ceretto (the winemakers) and Enrico Crippa (chef of Piazza Duomo). We found it a refreshing concept much like an upmarket French brasserie. It features the best ingredients and recipes from the Langhe. Most of what we tried here was some of the best versions we had ever had. My recommendation is to try anything. 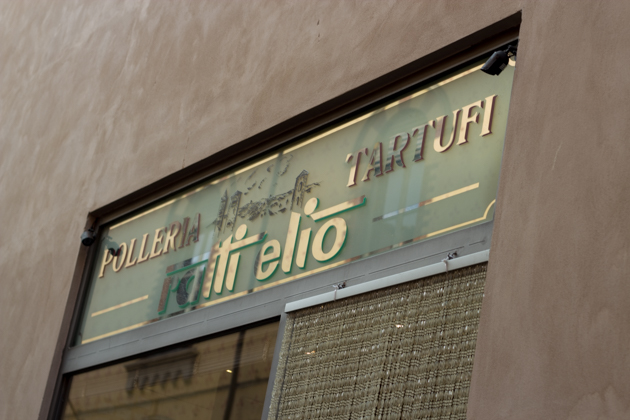 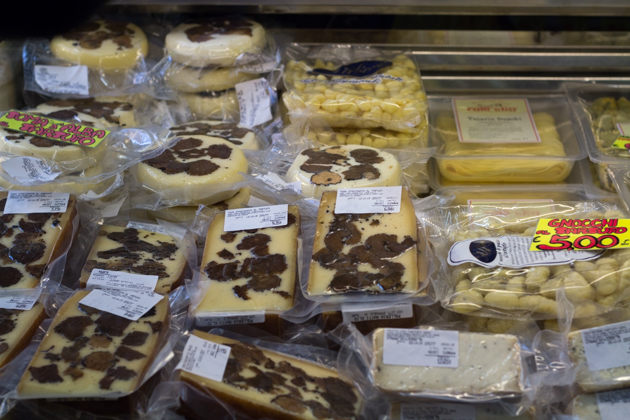 Thanks for visiting Living a Life in Colour again, good to have you back here. If you haven't yet, you might want to subscribe by e-mail . Enjoy! Thanks for visiting!
« The freshly pressed olive oil is starting to trickle in
Liberty, Equality, Fraternity and Solidarity »