中文
I often have an internal disagreement between my head, which tells me it makes most sense to buy local products which are fresh and support my local community, and my stomach, which wants to eat a different cuisine for every meal. This week, I may have met someone who can help me achieve the twin goal of diversity and buying locally and sustainably.

At AsiO Gusto in Korea, I had the recent pleasure of meeting Ben Reade, Head of Culinary Research and Development at Nordic Food Lab, a Copenhagen based non-for-profit established by Rene Redzepi of Noma (regarded by many as the best restaurant in the world). The gastro-geek in me immediately became a groupie not least because Ben’s job is to perform food science experiments not unlike those I furtively trialed in my bedroom as a child.  His specific focus is to create new food from local products in order to create diversity. He is also a really lovely guy who is passionate about food. 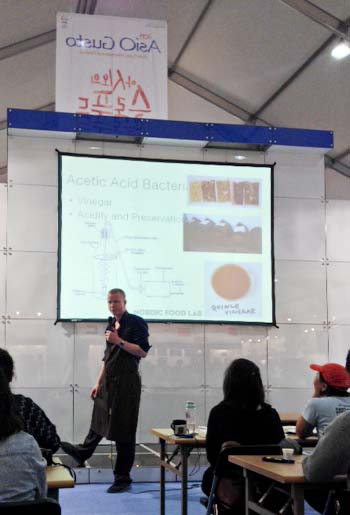 How do you combine diversity with buying in a sustainable way? Nordic Food Lab looks at different foods and their production methods internationally, scientifically and historically and then applies them to food available back home in order to attain their goal of “deliciousness”.

So what does Nordic Food Labs make? Like prosciutto? Well they have venison in Scandinavia so they made a venison prosciutto. Venison lacks a protective fatty layer like pork so Ben dips it first in honey and then in wax! I hear it is delicious. I didn’t get an opportunity to taste it sadly as it was confiscated by Korean customs. 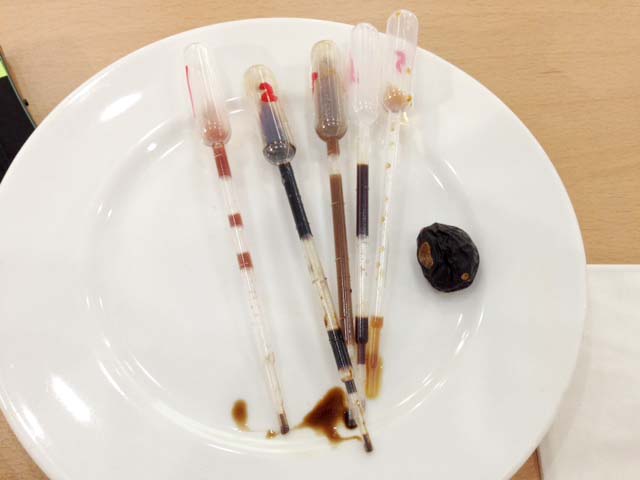 Like balsamic vinegar? Well there are a lot of apples in Denmark so they made apple balsamic vinegar. I tried the 12 year-old and it was delicious. Goal achieved. They also make vinegar with quince and elderflowers.

Like Chinese black bean sauce? They make it with malt. It does have a hint of black bean sauce but tastes like a mixture of soy sauce and malt vinegar without the acidity.

Nordic Food Lab also broke down food into species groupings and noticed there was huge diversity of flavours in microbes.

Did I lose you? Essentially they are looking at mould, yeast, and bacteria. Just as winemakers talk about terroir, the soil composition, affecting the ultimate flavour of their wine, Ben talks about the effect of terroir on microbes used in fermented foods. As a simple example, he brings along his sourdough starter which he uses to make bread in Copenhagen and encourages people to take it home and keep it going as their own sourdough mother.  With time, each environment will change each mother resulting in completely different bread.

Garum was a fermented fish sauce historically made by the Romans. In Denmark they have more grasshoppers so Nordic Food Labs makes grasshopper garum. He also makes pheasant garum. Ben loves anchovies but the Danes have herring so he fills herrings with fermented barley (an idea taken from koji– Japanese mouldy rice used to brew sake), salts them and makes “koji-chovy” which does taste similar to preserved anchovy, albeit with a herring after taste.

Creating diversity locally through the invention of new products may be the way to boost demand for local produce, particularly for foods which need to be converted into enhanced value-add products to balance out over-supply with demand. It may also be the solution to reducing the carbon footprint of our food. It will certainly have an impact on cuisine as new products find their way into dishes and recipes.  Maybe other countries will start similar programmes one day. Maybe in China, we will have balsamic vinegar made with red dates or ginko nut pasta sauce…

Thanks for visiting Living a Life in Colour again, good to have you back here. If you haven't yet, you might want to subscribe by e-mail . Enjoy! Thanks for visiting!
« AsiO Gusto – the first international Slow Food festival in Asia
Show me a proud farmer »